John Rebus Returns and Readers Are in for a Treat 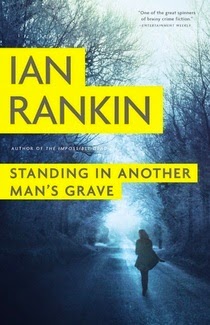 At the end of Exit Music in 2008, Ian Rankin was forced to retire his cantankerous Scottish detective, John Rebus, because Rebus had hit sixty, which is (or was) the mandatory retirement age for detectives in Scotland. Happily, Rebus now returns, albeit as a civilian assisting a cold case squad rather than as a full-fledged detective.

After writing a couple of novels featuring Malcolm Fox, who is in the "Complaints" or Internal Affairs Division and who is as sober and straight-laced as Rebus is not, Rankin discovered that there was a small unit in Edinburgh comprised of three retired detectives led by one active detective who looked into cold cases.

Rebus is now assigned to the unit and is visited by a woman named Nina Hazlitt. Ten years earlier, her daughter, Sally, had disappeared, but Nina has not been able to get anyone to revive the case. Rebus agrees to look at it and in digging through the musty files, discovers that a number of other young women have disappeared in much the same way from virtually the same location. Now another girl has gone missing and Rebus believes that he's looking at the actions of a single serial killer.

Rebus manages to work his way into the current investigation, which also involves his long-time understudy, Siobhan Clarke, even though he still has no official standing. He doggedly pursues the case, taking it in directions that the team leader doesn't necessarily believe fruitful, and along the way, he manages to antagonize a large number of people, just as he did in the old days.

In an interesting sub-plot, the retirement age has now been raised, and Rebus is considering applying for a return to active duty. In the process, he runs head-on into Malcolm Fox, who'd prefer to see Rebus dead and buried, at least officially.

All in all, it's a very entertaining story, and it's great to see Rebus back in the saddle again. Rankin writes, as always, with a great sense of place, and it's fun to watch Rebus as the old dog who's trying to cope with a new age and with new ways of policing. Long-time fans of the series are in for a treat, as is any other fan of crime fiction who happens to come across this book.
Posted by James L. Thane at 2:33 PM