Jack Reacher Is Suddenly Back in the Army 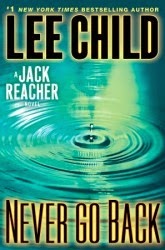 While traveling through South Dakota in 61 Hours, ex-military cop Jack Reacher had occasion to call in to his old office in Washington, D.C, the headquarters of the 110th MP. Reacher once commanded the unit but it now belongs to Major Susan Turner. Reacher decided that Turner had a very nice voice and, on the strength of that impression, he has slowly been making his way in the direction of D.C. in the hope that she will go out to dinner with him.

As this book opens, he finally arrives only to discover that Turner has just been arrested. His old unit is now under the command of an acting head named Morgan. Morgan not only tells Reacher that Turner is in the slammer but that Reacher himself is being charged with two relatively ancient crimes. Reacher claims to be totally innocent and to have little or no memory of either alleged incident. Nonetheless, the acting commander invokes some arcane regulation and informs Reacher that he is now back in the army and under Morgan's command, at least until the charges are cleared up. Morgan orders Reacher to go to a motel and to then report for duty first thing in the morning.

At this point, neither Reacher nor the reader has the slightest idea what in the hell might be going on, but obviously something very unseemly is in the works. Reacher is determined to discover what it might be and so dutifully checks into the motel as ordered.

As soon as he does two musclemen, clearly military me out of uniform, arrive at the motel and tell Reacher to get out of town, promising that no one will come looking for him if he does, and that they will beat the crap out of him if he refuses to do so.

Well, of course, no one threatens to beat the crap out of Jack Reacher, let alone actually do it, and before long the two musclemen are lying comatose next to their car which now has two new dents in the sheet metal from where Reacher has introduced their heads to the side of their ride. The next morning, Reacher gets up and reports to the unit as ordered, which is going to be very bad news for the people who are screwing with him.

It wouldn't be fair to say any more; needless to say the story proceeds as long-time Reacher fans will expect. The conspiracy at hand is deep and complex and, as always, Reacher will have to kick the crap out of any number of people who continue to underestimate him in spite of his size. (He is, of course, considerably larger and more intimidating than Tom Cruise.)

This is one of the better entries in this long-running series and would make a great summer read--or any other season, for that matter. This particular edition also includes an entertaining Reacher short story called "High Heat," which features a very mature sixteen-year-old Jack Reacher.
Posted by James L. Thane at 4:03 PM