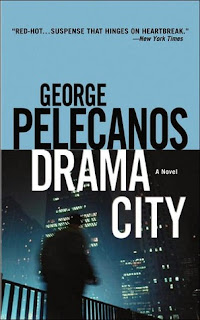 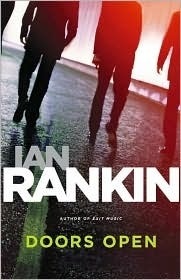 Ian Rankin's Doors Open is a stand-alone, set in Edinburgh that does not feature the author's long-time protagonist, John Rebus. It originally appeared as a weekly serial in the New York Times Magazine, and was perhaps inspired by Rankin's enthusiasm for heist films. (He lists ten of his favorite such movies at the end of the book.)

The book opens at an art auction where three friends meet. Not surprisingly, they all share an interest in fine art. Mike Mackenzie made a fortune with his software company, but after selling the company he finds himself bored and looking for some excitement in his life. Robert Gissing is an art professor who is miffed by the fact that so many pieces of great art are hidden away in private collections, unavailable to the general public. Alan Cruickshank is a successful banker with a taste for art that he can't afford.

Over drinks after the auction, Professor Gissing suggests that it would be enormous fun to "liberate" a few priceless works of art from the National Gallery's storage warehouse. Mike Mackenzie, in particular, is intrigued by the idea. He's rich enough to afford virtually any painting he might want, but he particularly covets a portrait that is in the Gallery's collection and that he knows will never come up for sale.

Before long, a discussion that apparently began as a light-hearted fantasy evolves into a serious plan to steal a handful of priceless paintings from the Gallery. Mackenzie brings into the scheme an old high school mate who has grown up to become a local crime boss, and the game is on.

The men construct what they hope will be a fool-proof scheme to steal the paintings without getting caught. But as complicated as the plan is and with as many people as there are involved in its execution, the potential for disaster looms large.

This is a very enjoyable book with lots of twists and turns. It's not as dark as most of the books in the Rebus series, and fans of great heist movies like "The Thomas Crown Affair" will probably enjoy reading it almost as much as Ranking obviously enjoyed writing it.
Posted by James L. Thane at 2:15 PM 1 comment: