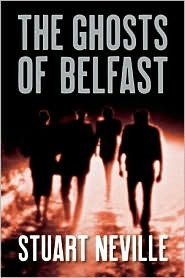 Stuart Neville, who formerly worked as a hand double for a "well-known Irish comedian," has written a brilliant, atmospheric first novel set against the continuing "troubles" in Northern Ireland.

In the public eye at least, the men who fought the brutal battles of the long struggle have now given way to the politicians and peace is in the wind. But behind the scenes there are still scores to be settled and discipline to be maintained. Additionally, some of the men who might have once been idealists fighting for a sacred cause have now degenerated into common thugs. And while peace may be at hand, they are determined to protect themselves, their profits and the criminal enterprises they have created.

Into this combustible mix steps Gerry Fegan, an IRA killer who has recently been released from prison. Fegan, who was once one of the most feared men in Northern Ireland, is now drinking heavily, apparently slipping into psychosis, and losing his edge. He is now more pitied than feared by those who knew him in the old days.

But Fegan is a changed man. More important, he finds himself haunted by the ghosts of twelve innocent people that he killed while carrying out his missions for the IRA. These ghosts of Belfast will not let Fegan rest until he has avenged their deaths by killing the men who gave the orders that led to their deaths.

In an effort to salve his conscience, and in the hope of getting the ghosts to leave him in peace, Fegan sets about the task of taking revenge against the men who were once his masters. By doing so, he threatens not only his targets, but the entire peace process itself.

Inevitably, then, Fegan becomes a target himself, of his former bosses and of the establishment authorities who are willing to go to any lengths to keep the peace agreement from unraveling. Fairly quickly the question becomes whether Fegan can complete his mission and satisfy the spirits who torment him before his enemies catch up to him. And along the way, Fegan also begins a very tentative relationship with a woman and her young daughter who may represent his last chance at redemption.

Stuart Neville has a rare gift with language, and this book is beautifully written. The scenes are well set; the characters are expertly drawn, and you will not soon forget them. This is a bloody, violent, and ultimately heart-breaking book, and once it takes hold of you, it will not let go.
Posted by James L. Thane at 1:06 PM No comments:

"Hell Bent" is the twenty-fourth book to feature Boston attorney Brady Coyne, and it ranks among the best of the entries. For those who haven't met him, Coyne is a sole practitioner with a client list that consists mostly of fairly well-heeled Bostonians and a secretary named Julie, who keeps his professional life in some semblance of order. He's long divorced and usually involved with an attractive female.

As Brady comments in this book, he was trained to be a lawyer, but his DNA programmed him to be a fisherman. In this book, though, unlike most of the others, Brady has no time for fishing. After an absence of several years, an old girlfriend, Alex Shaw, walks back into Brady's life and asks him to represent her brother, Gus. Gus is a photojournalist who lost a hand, and thus his profession, in an explosion in Iraq. Not surprisingly he comes back a changed man and the changes are not for the better.

Gus is suffering from PTSD; he's a stranger to his wife and daughters, and a menace to them and to himself as well. His wife sues for divorce and secures a restraining order against him, but Gus doesn't care. He's perfectly willing to give her everything; nothing matters to him any more. Alex wants Brady to protect Gus's interests in the divorce, and Gus reluctantly agrees to let Brady represent him.

Almost immediately thereafter, though, Gus is found shot to death, the victim of an apparent suicide. The cops and everyone else sign off on the case, but Alex refuses to believe that her brother would kill himself. Brady isn't sure, but Alex has walked back into his life four months after his latest girlfriend walked out of it. There's still a spark between Alex and Brady and so he agrees to investigate.

Inevitably, things are more complicated than they initially appear, and Brady finds himself drawn into a complex and dangerous situation. The result is a book in which the urgency mounts and which is increasingly difficult to put down. Long-time fans of the series will enjoy "Hell Bent", but it will also appeal to fans of crime fiction who have never sampled Tapply's work before.
Posted by James L. Thane at 7:51 PM No comments:

This is another of Richard Stark's (Donald Westlake's) Parker series that has been out of print and unavailable for a good number of years. Happily, the University of Chicago Press has recently published a new edition of the book with an introduction by Charles Ardai, the man behind the Hard Case Crime series.

The basic framework of the novel will be familiar to most fans of the series. Parker and a crew of men execute a carefully planned heist, in this case at a rock concert. Then, almost immediately, things go awry and Parker has to spend the rest of the book extricating himself from the resulting jam, hoping to get away with both his life and his share of the loot. As always, it's great fun to watch Parker at work both on the caper and in the aftermath.

At this point in the series, Parker is settling into a relationship with Claire, the woman he met a few books earlier in The Rare Coin Score. After living in hotels, Claire has found a house for them to share, which she hopes will be a haven for Parker between jobs. This is important to her, less so to him. Parker "didn't think about houses, they had as much to do with his life as apple trees." But Claire is important to him and so he feigns more enthusiasm than he actually feels.

This book is unique in the series, because a good portion of it is told from Claire's perspective. But it's an interesting approach, and given the importance that Claire assumes in Parker's life and, thus, in the series, it's nice to have this more complete introduction to her character.

A number of fans of this series have been extremely frustrated through the years because these books have been impossible to find. But with the books published by the University of Chicago Press over the last couple of years, the entire series is at long last available again. All of Parker's (and Richard Stark's) fans are enormously grateful.
Posted by James L. Thane at 7:59 PM No comments: