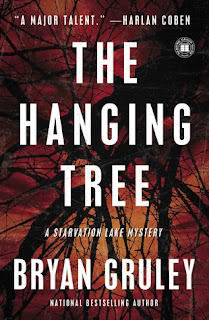 Bryan Gruley returns to Starvation Lake, a small Michigan town that's clearly seen better days, in the second Gus Carpenter novel, The Hanging Tree. As was apparent in Gruley's debut novel, Starvation Lake, Gus has seen better days as well. One of the great goalies ever to come out of a hockey-crazed town, Gus failed the team at a critical moment years earlier and neither the town nor Gus have ever forgotten. Gus once left Starvation Lake to become a hotshot reporter at a major Detroit newspaper, but that job ended ignominiously as well, and so Gus is now back home, living with his mother, and working as the executive editor of the local newspaper. The paper is owned by a media company that cares almost nothing for traditional journalism; it publishes only twice a week, and it is most often scooped on any major story by the local television station.


Gus is now dating a deputy sheriff, the almost ex-wife of another former Starvation Lake hockey great who has now left town. Gus and the deputy, Darlene, are interrupted one night when Darlene is called to the scene of a tragedy. As the town's intrepid reporter, Gus follows her to the scene only to find a woman named Gracie McBride hanging from a tree limb. Gracie was once Darlene's best friend. She was also Gus's second cousin, though they really didn't get along. Gracie recently returned to Starvation Lake after a long and mysterious absence.

The coroner rules Gracie's death a suicide, but neither Gus nor Darlene is convinced of the verdict. Gus decides to trace Gracie's mysterious past in an effort to discover what lay behind her death. At the same time, he's caught up in an investigation of the town's effort to build a new hockey rink. The rink is a tremendously popular project, but Gus uncovers problems with the development that no one else in town apparently wants to hear about.

Gus's investigations entangle him with a number of shady and very scary characters, and there's obviously a lot going on below the surface of this placid little town. Before his investigation is finished, both Gus and the reader will be in for a very wild ride.

These two books are the start of what promises to be an excellent series with an unusual and engaging protagonist. More than that, Gruley, who is the Chicago bureau chief of The Wall Street Journal, has brilliantly captured here the dynamics of a small town that is obviously on the ropes and desperate to recapture some of its former glory. In relating Gus's struggles as the editor of the Pine County Pilot, he also makes some very telling comments about the state of contemporary journalism.

Readers who might be attracted to this series would be well-advised to begin with the first book, Starvation Lake, which introduces Gus Carpenter and describes in some detail his history in Starvation Lake.
Posted by James L. Thane at 11:35 AM No comments: 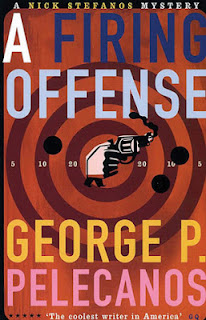 Even though this is one of the author's earlier efforts, it's a great ride with an intriguing protagonist and fans of George Pelecanos's later work who have not yet found this book will want to search it out.
Posted by James L. Thane at 3:00 PM No comments:

This is the second of Tony Hillerman's celebrated books featuring Lieutenant Joe Leaphorn of the Navajo Tribal Police. Later, Leaphorn would be assisted by a younger officer, Jim Chee, but this book, which won The Edgar Award, belongs to Leaphorn alone.


A young Zuni Indian boy, Ernesto Cata, disappears while training for his important role in an upcoming tribal ceremony. A large pool of blood suggests that something very bad has happened to Ernesto, and Joe Leaphorn is assigned to fine Ernesto's best friend, George Bowlegs, a Navajo. George has disappeared and the authorities believe that he might have important information about the fate that has befallen Ernesto. It is even possible, they believe, that George might have been responsible for the crime committed against Ernesto.

In his pursuit of the boy, Leaphorn crosses paths with George's alcoholic father, a group of hippies in a rather peculiar commune, and a determined archeologist who's working on a dig that may significantly change what we know about early man in what is now the southwestern United States. Along the way, Leaphorn reveals and in return discovers a great deal about the cultural and religious traditions of both the Navajo and the Zuni peoples.

This is among the most unique crime fiction series of the last fifty years. Hillerman, who died in 2008, wrote seventeen books featuring Leaphorn and Chee. The mysteries themselves are always captivating, but what set the series apart was the window it provided into the culture of the Indian people of the Southwest and the way in which Hillerman captured the physical setting in which these people live. This is truly a fascinating book in an excellent series
Posted by James L. Thane at 5:54 PM No comments:

An Early Classic from One of the Masters 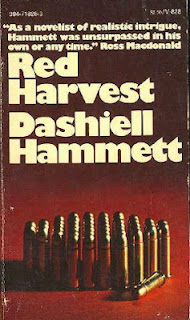 Originally published in 1929, Red Harvest is a classic crime novel that helped established the hard-boiled genre. This is most definitely not a polite, parlor mystery where most of the blood is spilled off of the page. As the title suggests, this book is filled with mayhem and the bodies are falling left and right.

The main protagonist is the Continental Op, who doesn't remotely resemble the genteel Hercule Poirot or any of the other fictional detectives who were so popular in the 1920s. The Op is certainly smart and skilled, but he's a squat, overweight man who's more than willing to cut whatever corners are necessary in order to achieve what he believes to be the greater good.

The Op, who is employed by the Continental Detective Agency in San Francisco, is detailed to the Personville, a mining town known to most as Poisonville. The town was, for a long time, under the thumb of Elihu Willsson who owned the Personville Mining Corporation, the local newspapers, and a number of other businesses as well. He also controlled all of the politicians of any consequence, up to and including the state governor.

During the First World War, Willsson had made whatever deals were necessary with the miners' unions to ensure that the company's operations were unimpeded. But once the war ended, he determined to break the unions and in doing so, invited in a number of thugs and crooks to assist him. The unions were effectively cowed, but the thugs and crooks stayed in town and carved out interests for themselves, effectively reducing Willsson's authority.

As the book opens, Elihu's son, Donald, has asked the Continental Detective Agency for assistance. Elihu has now turned the town's newspapers over to his son and the son is something of a reformer. But before the Op can even meet with Donald, Donald is murdered. The Op believes that it is his obligation to identify the killer. As he attempts to do so, old Elihu Willsson offers the Op $10,000.00 to clean up Personville. In reality, he wants to get rid of the gangs that are competing for control of the town so that he can dominate it unchallenged once again.

The Op is repulsed by the level of corruption in the town and by Elihu himself. But he decides to take the job so that he can indulge his own desire to clean up the town and cleverly drafts his agreement with Willsson to effectively give himself carte blanche, even if Willsson should ultimately change his mind about turning the Op loose on the problem.

The plot that unfolds is dense and convoluted, but the strength of the book lies in Hammett's prose style, in the characters he develops, and in picture he paints of Personville. As a practical matter, there is not a single moral, selfless person in the entire town, the Continental Op included. He quickly proves that he's ready to get down in the muck with the croooks, grafters and corrupt city officials and do whatever is necessary to complete the quest he's assigned himself.

As a young man, Hammett had worked as a detective for the Pinkerton agency in San Francisco and had spent some time during the war in the mining town of Butte, Montana as a strikebreaker. People have long speculated that "Poisonville" was modeled on Butte, a company town controlled by the Anaconda Mining Company. People have also speculated about Hammett's motives for writing the book, suggesting that he might have been seeking some redemption for the actions he had taken in Butte. Whatever the case, the result is a seminal work that stands as one of the great classics of American crime fiction and that has influenced scores of writers who have attempted to follow in Hammett's footsteps.
Posted by James L. Thane at 7:50 AM 2 comments: