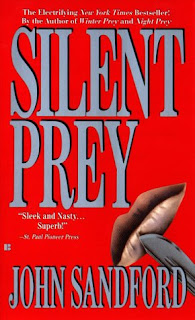 This is, to my mind, probably the least successful of John Sandford's Prey series. That's not to say that I didn't like it, but inevitably in any long-running series, I suppose, one book has to be the best and another has to be the worst, even if they are all quite good.

At the end of the book that preceded this one, Sandford's protagonist, Lucas Davenport, was forced to leave the Minneapolis police force. As this book opens, Davenport is at loose ends and his other activities are not filling the empty spaces or giving him the rush that he got out of being a cop. Then Dr. Michael Bekker, a particularly sadistic killer that Davenport had previously arrested, escapes from custody and begins a new killing spree in New York.

The NYPD brings Davenport in as a consultant to help catch the guy and give the PD some media cover. But the New York cops have a deeper agenda as well. A group of vigilantes has been taking bad guys off the street and may have claimed as many as forty victims. Thus far, only a handful of top cops have realized that the deaths may be the work of a single killer or group of killers. Almost certainly, the vigilantes have inroads deep into police intelligence and may be cops themselves. Under the cover of consulting on the Bekker case, the NY brass want Davenport to track down the vigilantes who have been given the name the Robin Hoods. Davenport is eager for the challenge which brings him back into the orbit of an old lover, Lily Rothenberg, and a potential new one in the female detective with whom he is paired.

Davenport is as tough and as witty as usual, but he's also something of a fish out of water in the big city, especially since this book is missing the usual cast of characters that surrounds Lucas. As a result, this book has a much different feel than most of the others in the series and doesn't feel quite "right."

Compounding matters is the fact that Sandford had already written one book with Bekker as the creepy villain, and unfortunately, Bekker is not one of Sandford's better bad guys. One book with him was more than enough; two was at least one too many. Later in the series, Sandford would carry another villain over from one book to another very successfully, but it doesn't really work here.

Still, this is a good read--several notches above a lot of the other books in this genre. As always, it's fun to watch Lucas in action, even if in New York. But it's even nicer to see him get back to the Twin Cities where he belongs in the next book.

Into a Mexican Heart of Darkness 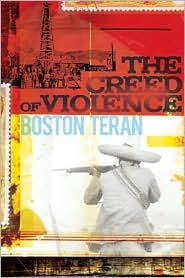 In 1910, a father and the son he abandoned as a child are thrown together against the backdrop of the coming Mexican Revolution. The father, a criminal assassin named Redbone, has hijacked a truckload of munitions that he intends to sell into the coming maelstrom. But before he can do so, Redbone is captured by the U.S. Bureau of Investigation, which would later become the F.B.I. The Bureau offers Redbone immunity for his crimes if he will help expose the criminals for whom the munitions are destined.

Having little choice in the matter, Redbone takes the deal and is placed under the direction of Bureau agent John Lourdes, whom Redbone fails to recognize as his son. Lourdes is seething with resentment against the injustices done to him and his mother by Redbone, but agrees to sublimate his personal concerns for the good of the mission.

Lourdes conceals his identity from Redbone, refusing even to acknowledge the relationship. Together, they descend into the murky, violent world of pre-Revolutionary Mexico, where it's impossible to tell the good guys from the bad, and where Lourdes soon discovers that, in fact, there may not be any good guys at all. Among the competing interests are the executives and employees of American oil companies who are determined to exploit the oil wealth of Mexico and who want a pliable Mexican government to serve their needs. They hope that the United States government will intervene in the crisis in support of their interests.

This is something beyond the road trip from hell--more like the road trip into hell. Redbone and Lourdes, both tough, smart men, must not only negotiate their way through a snake's nest of thugs and the brutal desert environment, but also through their own complex and tortured relationship. This is an absolutely compelling book--thought-provoking, beautifully written and achingly sad. Boston Teran has conceived and executed a brilliant piece of work that no reader will soon forget.

Another Winner from Martin Limon

Martin Limon has carved out a unique space for himself in the world of crime fiction. His series is set in the South Korea of the 1970s, and his two protagonists are U.S. Army Criminal Investigation Division detectives, George Sueno and Ernie Bascomb. Sueno is the brains of the outfit; Bascomb supplies the brawn. Luckily they have the reputation of being the best team in the C.I.D., which allows them to get away with occasionally disobeying orders and ignoring the miles of military red tape as they pursue their investigations.

Like most young American soldiers, when off-duty Sueno and Bascomb party hard in Seoul's red light district. One night they are approached by a young woman in a bar who asks them to deliver a note to a British soldier who is part of a U.N. detachment. Sueno and Bascomb oblige and shortly thereafter, they are ordered to the scene of a murder. There they find knifed to death the British soldier to whom they had delivered the note.

The detectives realize immediately that they have been used to target the victim for his killer and thus they launch a very personal manhunt in an effort to track down the perpetrator. Sueno and Bascomb are essentially caught in a vise: If the Army discovers their role in the killing, they will be in deep trouble, no matter the fact that their intentions were innocent. If that weren't bad enough, the killer quickly targets the two detectives who are closing in on him.

As the case develops, more bodies are discovered, and Sueno and Bascomb find themselves entangled in the murky underground (literally) world of the Slicky Boys, a gang of thieves who have been ripping off the U.S. Army for more than twenty years.

As is always the case in these books, Limon presents a very intriguing view of South Korea in the 1970s and of the interaction between the Koreans and the Americans. Sueno and Bascom are well-drawn characters, and it's fun to tag along with them whether they are partying with bar girls, investigating a crime, or running for their lives.

If there's any problem with this series, it's that Limon sometimes gets carried away and supplies a conclusion that is simply over the top to what is otherwise a solid police procedural. He's guilty of that here and you wind up shaking your head at the last couple of chapters. But that's a relatively minor complaint, and Slicky Boys is an otherwise very entertaining ride.