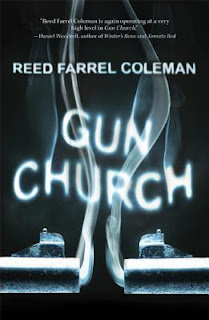 This is a gripping, well-written novel with a lot of discussion about the writing life and the business of writing, and it should appeal to a wide audience. Readers who like crime fiction and those looking for insights into the writing life should certainly enjoy it.
Posted by James L. Thane at 1:56 PM No comments: 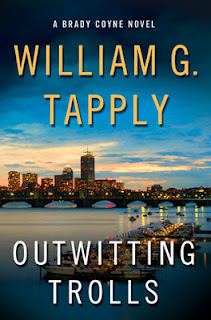 This is the twenty-sixth and last of the books in William G. Tapply's long-running series featuring Boston attorney Brady Coyne, published in 2010, a year after Tapply's death. The series began in 1984 with Death at Charity's Point, and Coyne also appeared in two other novels that Tapply wrote with Philip R. Craig. These two books featured Brady Coyne and Craig's series protagonist, J. W. Jackson, working in tandem.

Coyne did not appear to age much over the twenty-six years, although his ex-wife two sons did grow a bit older. He remained attractive to women and was usually involved in a relationship. While certainly no super-hero, he also remained perfectly capable of holding his own when things got rough.

That did not happen all that often. Brady ran a fairly genteel one-man practice with his long-suffering secretary, Julie, who tried, without much success, to introduce some discipline into Brady's regimen. His clients were mostly older, well-heeled types who came to him seeking advice about their financial matters. Truth to tell, Brady appeared to be much more interested in fishing than in the law and virtually every book found him sneaking away, or at least planning to sneak away from his office for some isolated but inviting fishing stream.

Inevitably, of course, some unusual problem occasionally appeared that required Brady to extricate a client from matters more serious than the usual drafting of a will. In this case, Brady gets a surprise call from Ken Nichols, an old friend and neighbor that he hasn't seen in years. Back in the old days, Brady and his wife Gloria had been close to Ken and his wife, Sharon. But then both couples divorced. Nichols moved away and the four lost contact with each other.

Now Nichols is in town for a convention and asks Brady to meet him for a drink. When they do, Brady senses that Nichols is in some sort of trouble, although Nichols insists that everything is fine. The next evening, Brady gets a call from Nichols' ex-wife, Sharon, who is in Ken's hotel room. Ken has been murdered; Sharon is the logical prime suspect, and she wants Brady to come to the rescue.

He does, in his usual low-key but competent fashion. He guides Sharon through the initial interviews with the police and then sets about trying to determine what actually happened before his client winds up taking the fall for a crime she insists that she did not commit. In and around his efforts to solve the crime, Brady must deal with some family issues of his own and with and old flame who has come back into his life but who seems reluctant to commit fully.

Opening the pages of a Brady Coyne novel was always like meeting an old friend. He was bright and interesting but he was also a regular guy and you could easily imagine sitting down and having a beer with him, talking about fishing or the Red Sox, another of his passions. The settings in these books were very well drawn; the plots were engaging and the action did not require a significant suspension of disbelief. A fan who has followed Brady Coyne through all of these adventures reads the last paragraphs of Outwitting Trolls with a profound sense of regret. Brady Coyne and William G. Tapply will both be missed.
Posted by James L. Thane at 1:43 PM No comments: 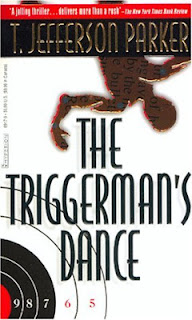 On a rainy day, Rebecca Harris is shot to death at long range in the parking lot of the southern California newspaper where she works as the assistant to a liberal columnist. It quickly becomes apparent that Harris was almost certainly not the intended target. Rather, it was the columnist herself who had antagonized large numbers of conservative readers with her outspoken opinions.

Rebecca leaves in her wake a tangled emotional mess, including her fiance, Josh Weinstein, an FBI agent, and her lover John Menden, a fellow newspaperman. At the time of her death, Rebecca was in the process of leaving Josh for Menden. Both men are devastated by her loss, and Weinstein is naturally further hurt and angered by her betrayal. Menden responds to the tragedy by quitting his job, withdrawing from society, and taking another job at a tiny newspaper out in the boondocks. Josh's response is to throw himself into the task of finding Rebecca's killer.

Weinstein ultimately concludes that the killer is the powerful head of a private security company--a former FBI agent himself who went off the rails when his son was killed and his wife critically injured in a shooting incident. The ex-agent was infuriated by a series of columns written by Rachel's boss suggesting that his son was a rapist, hence the botched attempt to kill her.

The problem is that Josh does not have enough evidence to charge the killer and so, in a bizarre twist, he recruits Menden, Rebecca's lover, to go under cover and get it. The two men will put aside their feelings about each other in the larger interest of catching the man who killed the woman they both loved.

This is a very good book that keeps the reader on edge, particularly after John infiltrates the killer's inner circle. The tension rises not only over the issue of whether John will survive long enough succeed but also over the lingering question about whether Josh might still want to ultimately punish Menden for stealing Rebecca's heart. Another winner from T. Jefferson Parker.
Posted by James L. Thane at 11:28 AM No comments: