Nate and his pregnant girlfriend Sara are driving from Minnesota to Reno, seeking a new life for themselves and their baby. On a snowy night in Nebraska, they see a man in a cafe who is obviously very sick. Sara takes pity on the man and when the stranger offers them $500 for a ride into Omaha, the kids accept.

The three drive off into a major winter storm and are forced to seek refuge in a run-down motel out in the middle of nowhere. On getting out of the car, Nate and Sara discover to their horror that their passenger has died. They are further stunned to discover that the passenger, Syl, has over $2 million in cash in his suitcase. Of course the kids should call the cops, report the tragic death of their passenger and hand over the money. But then, of course, the book would end at the conclusion of chapter two.

Tempted by the sight of all that money, Nate and Sara begin to imagine the life they might have if they were to simply dump Syl's body, wait for the plows to clear the roads and take off with the cash. Unfortunately for them, apparently neither Nate nor Sara has read Scott Smith's, A Simple Plan. Nor has either one of them ever seen the movie that was made from Smith's book, and thus they have no idea that keeping the money is a really, really, really bad idea.

Needless to say, complications ensue. As one might expect, the other stranded guests consist of the usual group of fine folks that one expects to encounter when stranded in a third-rate motel, miles from civilization trapped by the blizzard of the century.

The plot is hardly new, but Rector makes it seem fresh. This is a taut, lean book that grabs you early on and refuses to let go. Practically from page one, you're screaming at Nate and Sara, begging them not to make one bad decision after another. But even though they consistently reject your sound advice, you can't abandon them, and you can't rest until you see where the consequences of their actions finally take them.

In a series of five books, published from the mid- to late-1990s, Thomas Perry detailed the adventures of Jane Whitefield, a tough, clever, contemporary Native American woman who lived in western New York. Jane came to the rescue of people who were in serious trouble, guiding them out of their old lives and into new ones. In the process, she almost always had to help her clients to escape from brutal thugs who were hot on the trail. This usually put both Jane and her client in mortal danger and demanded that Jane use all of her wits and considerable physical skills to disable or eliminate the bad guys. Along the way, Jane created a new identity for the client and taught him or her how to survive in a new life.

Jane finally retired, married a doctor, and created a happy, fulfilling new life for herself, flawed only by her inability to conceive a child. Now, five years after her last adventure (nine years in real time), a pregnant young girl turns up at the hospital where Jane's husband works in Buffalo. The girl is looking for Jane, but only knows her maiden name, which the hospital staff does not recognize.

Coincidentally, Jane is heading a fundraiser at the hospital that evening, and in the middle of the soiree, a bomb goes off, interrupting the festivities. Jane and the young girl are thrown together in the confusion and it turns out that the bomb has been set by a team of hunters who have been hired to capture the girl and return her and her baby to the girl's abusive boyfriend and his seriously weird parents.

Naturally, Jane will have to come out of retirement and help the poor woman escape. She quickly discovers that because of technological advances, it's a lot harder--and a lot more expensive--to create a new identity for someone in the post-9/11 era. If that's not bad enough, Jane also discovers that the crew in pursuit of her new client is easily the toughest group of adversaries that she has ever faced.

The result is a book that begins, literally, with a bang and continues to move at a breakneck pace from start to finish. As always, it’s fun to watch Jane work, and it’s particularly interesting to see the details of how she creates a new identity for Christine, the woman she’s assisting. Inevitably, perhaps, Christine will make the exercise a lot more difficult than it otherwise might have been, but this simply means more fun for the reader who gets to watch Jane react to the added threat.

This book does require the suspension of some disbelief. For example, even after being out of the business for several years, Jane seems to have a huge supply of fake identities squirreled away, along with an inexhaustible stash of hundred dollar bills hidden in her basement. Without them, the book would come to a pretty abrupt halt on about page three.

Readers who have waited not-so-patiently for Perry to resurrect Jane Whitefield will be very happy to have her back. But those who’ve never read this series and who have missed all of the backstory might be better off starting with the first book in the series, Vanishing Act, and working their way forward. They won’t be disappointed and, unlike the rest of us, they won’t have to wait nine years to get to Runner. 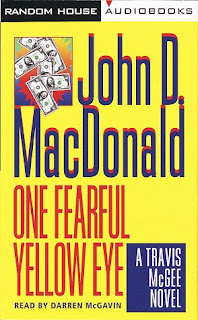 The eighth installment of the Travis McGee series takes place in Chicago rather than in Florida, and thus most of the usual cast, save for McGee himself of course, is MIA. This is not a book that would have endeared MacDonald to the Chicago Chamber of Commerce. The author was obviously not very fond of the city, and through McGee makes some fairly cutting comments about the Windy City and its inhabitants.

For those unfamiliar with the series, McGee is a self-styled "salvage" expert. If someone is defrauded and has no legal recourse, McGee will use his considerable talents to recover what has been lost. His fee is fifty percent of the recovery; expenses come off the top.

In these books there is always a fragile woman who has been badly treated, sometimes physically, sometimes emotionally, and often both. In addition to recovering what has been stolen by the bad guys, it will be McGee's job to restore the poor woman to a state of health and physical well-being--unless, of course, she manages to get killed along the way.

In this case, one of these previously broken birds (the book's description, not mine), Glory Doyle, turns to McGee for help a second time. Her husband, a respected Chicago physician, has recently died and Glory discovers that during the last year of her husband's life, someone had managed to bleed him of his entire fortune. McGee comes to Chicago to chase down the money and punish the evil-doers. In the normal course of things, he will also have to rescue a beautiful but frigid blonde who has no idea why she hates sex. Can McGee cure the poor woman and turn her into a sexual dynamo while at the same time he deals out justice to the bad guys? Is the Pope Catholic?

As the book progresses, we also get a heavy dose of McGee's philosophy as he ponders the mysteries of the universe and the failings of his fellow man. He's particularly hard on Chicago legend Hugh Hefner and the Playboy lifestyle.

This was in its day, one of the most popular mystery/suspense series ever written. But sadly, it has not held up very well over time. One naturally expects that a book that was originally published in 1966 is going to show its age, but these books now sound positively archaic and re-reading them is almost always disappointing. When I first discovered the paperback reprints of these books back in my youth, I devoured them and couldn't wait to find another. Every couple of years or so, I pull one off the shelf, hoping to discover again some of the magic that first drew me to McGee and his adventures. Unhappily, I haven't found it again in a long time. But that won't stop me from trying again in another couple of years.