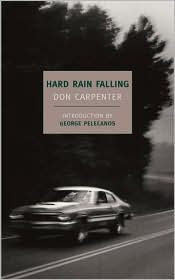 "Hard Rain Falling" first appeared in 1966, but was resurrected by George Pelecanos and republished in 2009 by New York Review Books as part of its Classics series. In his introduction, Pelecanos suggests that it "might be the most unheralded important American novel of the 1960s."

I'm not sure I'd go quite that far, but it is a very good book with brilliantly drawn characters. The main protagonist is Jack Levitt, an orphan whom we first meet on the streets of Portland, Oregon, in 1947. Jack is 17 at the time and has fallen in with a gang of rough boys who live by their wits on the margins of society.

The book follows Jack's life until 1960, and it's not a pretty picture. Jack is in and out of trouble and, as a consequence, is also in and out of jail through most of this time. Some of the prison scenes are harrowing but, for that matter, so are many of the scenes when Jack is out on the streets, technically a "free" man.

Early on, Jack meets Billy Lancing, a young black pool hustler from Seattle. Jack, who has no special skills or talents, envies Billy who has a great natural gift as a pool player. Initially, Jack targets Billy as a mark, but the two form a bond that will sustain them both as they continue to cross paths through the years.

Jack and Billy both spend a great deal of time contemplating their own lives and the nature of life in general, and even though they raise important questions, there are times when Carpenter extends these ruminations for a bit longer than he should. But that is really the only flaw in this book, whose principal strength lies in the characters. Even the most minor of whom are fully realized and totally unforgettable.

There is not a single phony or contrived moment in this book, and from start to finish, the reader is immersed into a story that seems completely real and that is totally compelling. This is not a pretty world, but once Carpenter has grabbed hold of you, you can't turn away from watching it.

This is very much a book of the early 1960s, and the universe that Carpenter has recreated here is long since gone. He serves up a slice of American life that few of us would want to experience first hand. But readers will be grateful to George Pelecanos and to New York Review Books for giving them the opportunity to visit it from a safe distance.
Posted by James L. Thane at 3:14 PM 2 comments: