Matthew Scudder Takes a Stab in the Dark 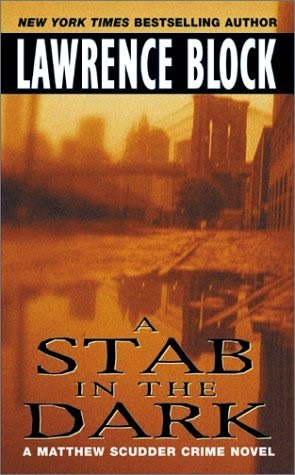 Matthew Scudder prowls the streets of New York City for the fourth time in A Stab in the Dark. By now the character has been firmly established: Matt is an ex-cop who left the force under tragic circumstances and who now works unofficially as a private detective. He doesn't have a license; he doesn't pay taxes, and he doesn't fill out paperwork. But sometimes he does a "favor" for a friend and the "friend" shows her or her gratitude by giving Matt money.

He also drinks. Heavily by this point. But he refuses to consider himself an alcoholic and insists that he could stop anytime he wants to. He doesn't want to yet, even though he now experiences periodic blackouts. But still, his drinking is not yet interfering with his ability to get the job done.

Insurance executive Charles F. London needs a "favor." Nine years earlier, his daughter, Barbara Ettinger, was viciously stabbed to death, apparently by a maniac who was known as the Ice Pick Killer and who claimed seven other victims. Finally, by a stroke of luck, the madman has now been captured. The only problem is that, while he admits to the seven other killings, he insists that he did not kill Ettinger. He also has an iron-clad alibi for the time Ettinger was murdered, given that he was in custody on that day.

London had come to whatever peace he could find, assuming that his daughter's death was simply an inexplicable piece of bad luck. Now, though, his world is upended again when it appears that Barbara was killed perhaps for a reason and that the murderer is still at large. The cops claim there's nothing they can do, given the time that has elapsed, and so London walks into Armstrong's saloon and asks Scudder to take on the job. Scudder agrees, although he tells London that the odds are very slight. The trail will be just as cold for him as it is for the cops, and he doesn't even have their official standing.

Scudder then does what Scudder does. After depositing ten percent of the fee in a church's Poor Box, he begins pounding the streets, tracking down his pathetically thin leads and fortifying himself with more than the occasional drink, for "maintenance" purposes of course. He's an enormously intriguing character and, as is always the case in this series, the plot is interesting and well-developed. As in the first three books, it's great fun walking the streets of the big city with Matthew Scudder, although by this point one can't help but be increasingly concerned for his health and well-being.

A word of caution: Anyone interested in dipping into this series would be very well-advised to start with the first book, The Sins of the Fathers. Trust me when I say that you want to be on this ride from the very beginning.
Posted by James L. Thane at 3:24 PM