Matthew Scudder Wanders into the Midst of Death 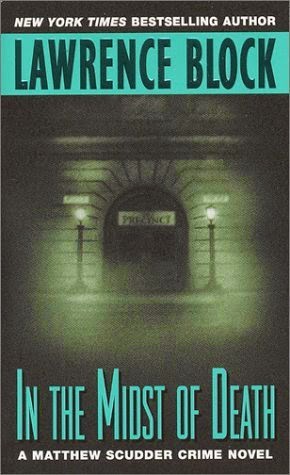 This is the third book in Lawrence Block's excellent Matthew Scudder series. For those who may not know, Scudder is a former cop who now works as an unlicensed private detective, doing "favors" for people who show their appreciation by giving him money. Scudder, who has more than his share of demons, lives alone in a tiny hotel room in New York City's Hell's Kitchen. He spends most of his time in saloons and has a drinking problem that is obviously getting worse as the series progresses.

In this case, Scudder is asked to work on behalf of a cop named Jerry Boradfield. Broadfield makes no secret of the fact that he's a bent cop, and he practically flaunts the money he's taking as a result. But suddenly, for reasons that no one can imagine, Broadfield is cooperating with an investigation of police corruption. As a consequence, he's made a lot of enemies in the police department, and very few cops are unhappy when an expensive hooker emerges, claiming that Broadbent, a married man, is not only extorting her for sex but for money as well.

Broadfield claims that the charge is untrue and is an attempt to smear him and discredit him with the anti-corruption committee. He wants Scudder to investigate and knock down the charges. The situation escalates dramatically, though, when the hooker turns up dead in Broadfield's hideaway apartment and he gets charged with the murder. The cops are happy to see him jammed up and they're not about to investigate any further.

Scudder will, even though he's not at all fond of Broadfield. What follows is an very good story in which Matt does what he's best at--walking around the city of New York, talking to people, sorting out their stories, and otherwise doing the grunt work that will make the case. He's an extremely compelling character and it's great fun to watch him wander the city, which is, as always, a major part of the story in its own right.

This is a very solid piece of work that holds up amazingly well, even though it's now nearly forty years old, and it's a sure bet that it will still be entertaining crime fiction fans forty years from now and beyond.
Posted by James L. Thane at 8:35 PM