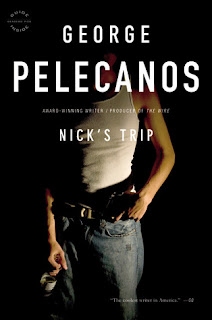 This is the second installment in George Pelecanos's trilogy featuring Nick Stefanos, who lives in Washington, D.C. When last seen in A Firing Offense, Nick had left his job at Nutty Nathan's electronic store and had gotten his license as a P.I. Clients are few and far between, though, and so Nick takes a job as a bartender in a dive bar called the Spot where there's never a lack of clients.

There's no lack of booze at the Spot either, and Nick seems in danger of watching his young life slip away in a sea of whiskey and a cloud of cigarette smoke. He has his music and a girlfriend of sorts, but that's about the sum of his life at the moment. Then one day, a long-lost friend named Billy Goodrich walks into the Spot. Back in the day, Nick and Billy were tight and once took an infamous road trip that Nick has never forgotten. It seems that Billy's wife, April, has disappeared and Billy wants Nick to find her. He insists that he just wants to know that she's OK.

As Nick begins to dig into the case he discovers that April is not the only thing that's missing. She'd been seeing a small-time numbers runner named Joey DiGeordano who suddenly seems to be missing $200,000 that disappeared along with April.

The plot begins to thicken and soon Nick and Billy are on another road trip into a rural area south of D.C., hot on April's trail. In the meantime, Nick has also agreed to look into the murder of a newspaper reporter named William Henry. The cops have written off the crime, but Henry was a friend and Nick refuses to let the murder go unsolved.

As is always the case with a novel by George Pelecanos, the book is very atmospheric. All of the characters are well drawn; music infuses the story, and you can practically taste the liquor and smell the cigarette smoke. The search for April Goodrich is an interesting and colorful tale, and along the way, Nick learns a great deal about the nature and value of friendship.

If I have any quarrel with the book, it would be that the second case, involving the murder of William Henry, seems tacked on to the plot and does not flow as smoothly as it might. One also wonders how anyone, even a person as young as Nick Stefanos, could possibly function at a reasonable level, given the amount of booze, cigarettes and dope he consumes during the course of the book. But these are minor complaints; in this book, as always, George Pelecanos demonstrates that he's a master of the craft and Nick's Trip is a great ride.
Posted by James L. Thane at 11:09 AM