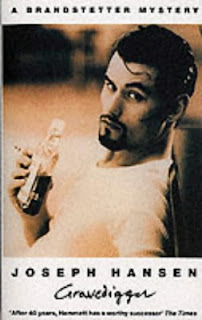 First published in 1982, this is the sixth entry in Joseph Hansen's series featuring Dave Brandstetter, the first openly gay detective to inhabit the world originally occupied by Philip Marlowe and other such giants of the P.I. genre.

Dave is now working for the Banner Insurance Company. A young woman named Serenity Westover has been missing for a couple of years, after falling under the spell of a nutcase named Azrael, who is something of a mash-up of Jim Jones and Charles Manson. The cops have invaded the ranch occupied by Azrael and his followers, and they have discovered the graves of several young women, one of whom may be Serenity.

Serenity's life had been insured by Banner and her father, Charles Westover, a disbarred lawyer, files a death claim. But when Dave attempts to interview her father, Westover is nowhere to be found. His house is empty and apparently hasn't been occupied for at least a couple of weeks.

Naturally, Dave is not going to sign off on the claim unless and until he can interview Westover and ensure that Serenity is, in fact, dead. But Dave's effort to discover the missing father leads him deeper and deeper into a world of old secrets that a lot of people would rather not see exhumed, and before long, he finds himself in serious trouble. At the same time, he's settling into a new relationship with a much younger man, and that is causing him problems as well.

This is a very entertaining book from a day and age when P.I. genre novels were still relatively short and tightly focused. Brandstetter is a character unique in the annals of crime fiction, especially for the early 1980s, and this is a book that should appeal to anyone interested in the evolution of this genre.
Posted by James L. Thane at 6:12 PM