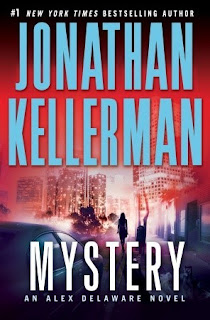 It's a bittersweet evening for Alex Delaware and his Main Squeeze, Robin. For a long time one of their favorite romantic hangs has been at the bar in the aging Fauborg Hotel in Beverly Hills. But the place is closing and on the the bar's last night, Alex and Robin go in for a farewell drink. The occasion is beyond sad and their attention is drawn to an apparent bodyguard outside the hotel and to an attractive young woman who is the only other patron inside the bar. She's dressed in white, wearing an expensive diamond watch, and is apparently waiting for someone who never shows.

Two days later, Alex is working at home when his pal, Lt. Milo Sturgis drops in. As usual, Milo cleans out the refrigerator and he shows Alex photos from his latest homicide. In an amazing coincidence, which is somewhat typical of this series, it turns out that the murder victim is none other than the young woman that Alex had seen in the bar.

Although there is absolutely no reason for a consulting psychologist to be involved in this case, Alex naturally tags along with Milo as he investigates the crime. There are some fairly seedy and kinky characters involved; some of them wealthy, others not. Simply identifying the victim becomes a major challenge.

Milo ultimately gets an anonymous tip that leads them to a website where wealthy Sugar Daddies attempt to make arrangements with Sweet Young Things. The victim was registered with the site and had made a connection with a very wealthy patron.

Alex and Milo will formulate and discard several scenarios that might have led to the crime before hitting upon the solution. It's still fun to watch them work, but after twenty-six books, the series has settled into a pattern that can be a bit frustrating for readers who have been along for the entire ride.

As an example, Milo's rude eating habits are really getting tiresome. Certainly, there ought to be a way of defining the character without having him clean out every refrigerator in sight and spilling half of his meals all over himself. But the hardest thing to come to grips with here is Delaware's role in a lot of these cases.

In the earlier books, which were much better than many of the later ones, Alex served the department as a consulting psychologist, most often dealing with the children who were involved in the homicide cases. In these instances, he had a legitimate reason for being involved. In a lot of the later books, though, he simply tags along as Milo investigates his cases. As in this instance, there's no legitimate reason for Alex to be anywhere near this case, and certainly no real homicide investigator would allow a civilian to play the role that Alex does.

During the course of this book, Alex will deal with a situation in which a child needs his help, but it has little or nothing to do with the investigation and the reader is left to wonder why Milo doesn't simply attend to his own business.

That isn't to say that this is a bad book. It is entertaining, but for those who yearn for the more compelling and sophisticated cases of Delaware's early career, it's still something of a disappointment.
Posted by James L. Thane at 8:04 PM