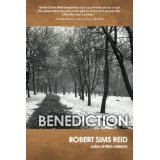 A piece of L.A. scum named Johnny Perbix has shown up in Rozette. But Perbix is a rich piece of scum--a record producer turned-real estate developer. Perbix has bought a piece of prime real estate, Bride's Canyon, that overlooks Rozette and the valley below. The property was once a beautiful, forested park-like area that the original owner had allowed the local citizens to enjoy. The original owner had hoped to donate the land as a public park, but he fell on hard times financially and had no choice but to sell. Shortly thereafter, he and his wife died in a tragic accident.

Now Bride's Canyon has been clear-cut and Johnny Perbix is planning an upscale housing development there. Since the local economy is depressed and the new development will pump a lot of money and jobs into the area, some citizens are willing to forgive Perbix for desecrating such a beautiful spot and for being less than an upstanding citizen.

As the book opens, a woman is brutally assaulted by two men who not only violate her but videotape the assault. The woman was once married to one of Perbix's employees and she is also the daughter of the original owner of Bride's Canyon. Banks sees Johnny's fingerprints all over this crime and is determined to use it as a wedge to bring Perbix down. The only obstacles in his path would appear to be his bosses in the department, the townspeople who still want to placate Perbix, and the victim herself who blows hot and cold with regard to Banks and to the crime that was committed against her.

It all makes for a volatile mix, and Banks is determined to get to the bottom of the seamy mess, no matter the danger or the personal cost to himself. This is a good read that should appeal to anyone who enjoys their crime fiction dark and nasty.
Posted by James L. Thane at 7:06 PM