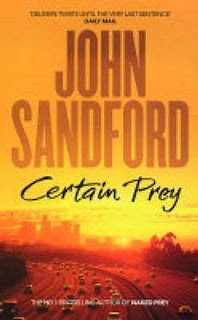 This is probably my favorite book in John Sandford's Prey series, featuring Lucas Davenport of the Minneapolis P.D. and, later, of the Minnesota State Bureau of Criminal Apprehension. Sandford is famous for creating terrific villains and the main antagonist here, Clara Rinker, is perhaps his best. Actually, Lucas is up against two great antagonists in this story: Rinker, who is a particularly deadly professional hitwoman and Carmel Loan, a man-eating, ass-kicking Minneapolis criminal attorney.

As the story opens, Carmel Loan has fallen madly for Hale Allen, a sexy but rather dimwitted attorney who also works in her firm. The problem is that Allen is married and thus, for the moment at least, unavailable. Carmel has kept her desire for Allen a secret and, through the intercession of a drug dealer she successfully defended, she hires Carla Rinker to kill Allen's wife, Barbara. Once Barbara is out of the way, Carmel figures to help Hale get over his loss ASAP.

Rinker arrives in Minneapolis and smoothly dispatches Barbara Allen. She then collects her money and returns to her home base in Wichita, Kansas, where she owns a bar. But then, everything turns to crap on a variety of fronts when Carmel's ex-client tries to blackmail her over the hit. Rinker returns to the Twin Cities and together, she and Carmel attempt to tie up the loose ends.

Davenport and his team are on the case, but as the bodies continue to pile up, there's precious little evidence pointing toward the killer or killers. Davenport, though, is one of those detectives who works by inspiration as much as anything else, and when he gets a sense of what might be going on, the fun really begins.

As is always the case in this series, the action moves rapidly. There's a great deal of humor, and it's great fun to watch Lucas and his usual cast of characters at work. It's especially fun to watch the by-play between Lucas and Carmel Loan, and Clara Rinker is an inspiration. On the one hand, she's a truly bad person who's killed a couple of dozen people just for the money. On the other hand, though, you can't help but love her, just as you can't help rooting for Lawrence Block's great professional hitman, Keller.

This book does depend on at least one pretty amazing coincidence, but by the time it occurs, you really don't care. You're having so much fun by that point that you're perfectly willing to suspend disbelief and happily go along for the rest of the ride. This is a great read.
Posted by James L. Thane at 11:20 AM