A Shoplifter Gets Kinsey Millhone Into a World of Trouble 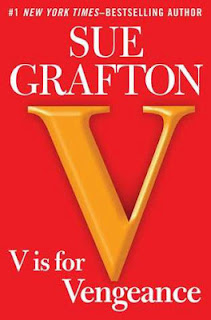 P.I. Kinsey Millhone is taking a break and reluctantly catching up on some shopping in a Nordstrom's department store, when she sees a pair of shoplifters helping themselves to the store's merchandise. Kinsey alerts a clerk who in turn calls security. One of the shoplifters, a middle-aged woman named Audrey Vance, is caught and arrested. Her younger companion escapes, but not before attempting to run over Kinsey in the parking garage.

Vance is released on bail and shortly thereafter is found under a bridge, apparently having committed suicide--perhaps because of the shame? Kinsey feels a bit guilty for her role in all of this, even though the woman was clearly wrong and deserved to be arrested. But in spite of the evidence suggesting otherwise, Vance's fiancé refuses to believe that the love of his life could have been a career criminal. He thinks the whole thing was a minor mistake that got blown way out of proportion and he hires Kinsey to investigate. As always happens in these cases, Kinsey is soon up to her neck in trouble.

Meanwhile, a wealthy society woman grows suspicious of her husband while a young man with a gambling jones foolishly borrows ten grand from a loan shark and heads off to Vegas. The loan shark has family, romantic and legal problems of his own, and all of them are on a collision course with Kinsey Millhone at the center of the impact.

The early books in this series were comparatively brief and were all narrated by Millhone in her first-person voice. This book, the twenty-second in the series, is longer and more complex than the earlier entries. Much of the story is still narrated by our intrepid heroine, but much of it is also told from the third-person POV of several other characters.

It's a fun read, but the problem with the book, at least for me, is that the other characters are a lot more interesting than Millhone. And the tone of the book suggests that, subconsciously at least, the author may feel the same way. The book really comes to life when the story focuses on the other characters. Grafton has created some very complex and interesting roles here and it's fun to watch their stories unfold.

When Kinsey takes over the story, though, things seem to drag a bit. Perhaps this is because over the course of the earlier twenty-one books in the series, we've seen Kinsey go though her routine over and over again. A long-time reader of the series can pretty much predict every move she's going to make and the character no longer seems to contain any surprises. This is perhaps inevitable when the series has been as long and as successful as this one, but it's probably a bad sign when the reader sighs every time the main protagonist takes over the story again.

My other concern about the series as a whole is that Grafton decided early on that Kinsey Millhone would not age in any practical sense and that the stories would stay rooted in the 1980s. Kinsey does celebrate her 38th birthday in this book, but that's not bad for a character who first appeared in 1982. (This book is set in 1988.)

While this spares Grafton from having to deal with all of the changes that have occurred over the last thirty years, it does limit her as well. Kinsey Millhone is essentially stuck in a time warp. She hasn't grown or changed very much since A is for Alibi and neither has the world around her. For a long-time reader, this means that the character and her surroundings have become awfully static and predictable and thus, perhaps, somewhat less interesting.

Still, it's hard to argue with success, and Grafton has created here one of the most enduring characters and one of the most successful crime fiction franchises in this history of the genre. She still spins a fun tale but one wonders how much better these books might have been had she brought the character forward into the modern era.
Posted by James L. Thane at 2:08 PM