A Complex Moral Dilemma in the 87th Precinct 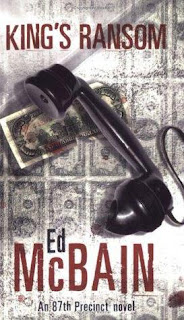 Doug King, a wealthy industrialist, is putting together a secret deal that will effectively give him control of the company where he has been working for most of his life. To make the deal, he's had to scrape together every last dime he has and that he can borrow. Now he's got $750,000 and is ready to make his move.

Just as he's about to put his plan into motion, however, a kidnapper calls King and tells him that the kidnapper and his partner have King's young son, Bobby. If King wants his son back alive, he needs to pay $500,000. The kidnappers will phone with instructions later.

King and his wife are naturally panicked and call the cops. Steve Carella and other detectives from the 87th Precinct spring into action and are busy setting traps on King's phone lines and doing the other things that the police would normally do in such a case when Bobby walks through the door after playing outside.

It turns out that the kidnappers have made a critical mistake. Instead of grabbing Bobby, they have grabbed his playmate, the son of King's humble chauffer. The kidnappers don't care; they still want the five hundred grand. Doug King would have been willing to pony up the money for his own son, but he's not so sure about ransoming back the chauffer's kid, because if he does, he will not have the money he needs to complete his big business deal.

While Carella and the other detective try to track the kidnappers and rescue the boy, Doug King must wrestle with his conscience and decide what to do. It makes for an entertaining tale with a complex moral dilemma at its center. The result is one of the better early entries in this long-running series.
Posted by James L. Thane at 12:11 PM