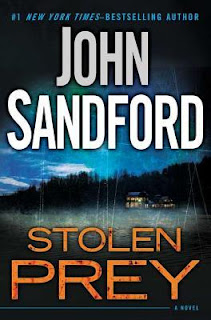 Lucas Davenport is back on the job for the twenty-second time, and as the book opens Lucas is himself the victim of a crime. Out for a run, he stops by an ATM and withdraws $500.00. Moments later, a pair of tweekers rob him at gunpoint. They take his five hundred bucks and knock him down, breaking his wrist. Lucas will have to be in a cast for three months and, needless to say for those who know him, he's going to be seriously angry about this.

Lucas is determined to find and arrest the robbers and since they are apparently from a rural area out of town, he delegates the task to Virgil Flowers, who will report in periodically. Lucas will be constantly on Flowers' case about this and will insist on being their when the offending tweekers are finally run to ground.

Meanwhile, a family in a wealthy Minneapolis suburb is brutally tortured and murdered. It's perhaps the worst crime scene that Davenport has ever encountered and it bears the signature of a Mexican drug gang. The father of the murdered family was the last to die and owned a software company that sells Spanish-language software in Mexico. Lucas wonders if perhaps the company was laundering money for drug lords.

As it turns out, the drug lords seem to be missing $22 million, and they would like it back. The trail leads to Minnesota and the head of the cartel has dispatched a trio of cold-blooded killers to find it. Lucas is faced with the task of finding the killers and tracking down the missing money.

This is a fun read, but to my mind, it's not up to the usual very high standards of the series as a whole. The book seems somehow a bit flat, not as exciting and not as witty as most of Davenport's other adventures.

As an example, when Lucas gets the cast on his wrist, he naturally bitches about it and you expect that this is going to be a humorous subtheme that Sandford will use through the rest of the book, as he often does with something like this. After a few pages, though, he drops any reference to the cast. Then, finally, as the book ends, the three months are up and the cast come off. At which point, the reader smacks himself in the head and says, "Oh yeah, right. He's had a cast on his wrist through the whole book!" As quickly as Sandford lost interest in the cast, one wonders why he even bothered with it in the first place.

Another problem lies in the fact that the villains in this book are not up to Sandford's usual standards. Sandford is know for creating great, nasty, smart antagonists who are always a good match for Davenport. In this case, though, the trio of killers, while brutally nasty, are just a bunch of dumb thugs who stay one step ahead of the cops more by luck than anything else. The people who stole the $22 million are not all that interesting or challenging either. They're good at manipulating computer code and stealing money out of bank accounts, but they're certainly not in a class with Clara Rinker or many of Sandford's other antagonists. And the investigation of the theft is not all that riveting.

Finally, many of the usual cast of characters are missing here. A few, like Davenport's favorite undercover investigator Del Casplock, will put in a token appearance now and then, but without the normal group that usually surrounds Davenport, the banter is not nearly as sharp and amusing as it normally is. One character, in particular, has been out of the lineup for the last couple of books and is very sorely missed.

Still, even though Sandford and Davenport may not be at the top of their game here, I enjoyed the book and am very much looking forward to Davenport's next outing, Silken Prey.
Posted by James L. Thane at 12:10 PM