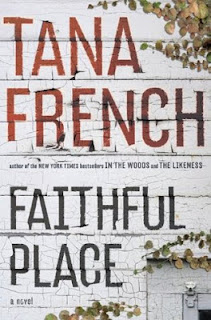 I enjoyed very much Tana French's first two novels, In the Woods and The Likeness, but I think that this book, her third, is by far her best work. It's another atmospheric character-driven story, featuring Frank Mackey, the Dublin police detective that French first introduced in The Likeness.

As a nineteen-year-old boy, Mackey was living in Faithful Place, one of Dublin's poorer neighborhoods, jammed into a tiny home with his brothers, sisters and ever-battling parents. It was a grim, depressing place, and few people ever seemed to escape from it. The culture of poverty being what it is, most of the young people in Faithful Place simply grew up to turn into their parents.

Young Frank, though, was desperately in love with Rosie Daly, a neighbor whose father forbid the romance, assuming that his own family, poor as it might be, was well above the Mackeys. Frank and Rosie determined to escape their families and their destinies by running away to London. They saved their money, bought the tickets, and on the night they were to leave, Frank sneaked out of his house to wait for Rosie.

She never showed up.

Late that night, Frank found a note from Rosie, apparently intended for him, indicating that she had decided to leave alone. Broken hearted, Frank never returned home but rather left without a word himself and ultimately wound up in the Guard, the Dublin police force, something that would have made him an outcast in his old neighborhood and in his family as well.

Frank married, had a child of his own, and divorced without ever telling his family of the marriage or the child. Now, twenty-two years after that fateful night, Frank's sister Jackie, the one family member with whom he has remained in contact, calls him to say that Rosie Daly's suitcase has been found in an abandoned home in Faithful Place.

The discovery upends Frank's life. For all those years he assumed that Rosie had simply ditched him and gone to England alone. But the discovery of the suitcase suggests that something much different might have happened.

For the first time after all those years, Frank returns home to examine the suitcase and launch a personal investigation into Rosie's disappearance. Once again, he find himself deeply immersed in the affairs of the dysfunctional family into which he was born and from which he thought he had escaped forever. And along the way, he will discover some hard, shocking truths about himself and the people of Faithful Place.

In addition to being a compelling suspense novel, this book is a powerful meditation on the nature of family life and on the obligations that one either assumes or has forced upon him simply by the act of being born into a family. It's beautifully written with great characters and it's hard to imagine any reader that would not treasure this book. I can hardly wait to get my hands on Tana French's next novel.
Posted by James L. Thane at 8:36 PM