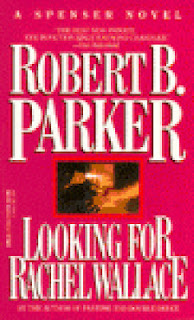 This is an early entry (number six) in Robert B. Parker's long-running series featuring Spenser, the tough, wise-cracking Boston P.I. It's also one of the best, before the plots became less compelling and before Spenser's relationship with his long-time lover, Susan Silverman, became virtually insufferable. Susan appears in the book, but she's not at it's center and she and Spenser are not constantly cooing over each other in a manner that would embarrass the average junior high school couple.

In this case, Spenser is hired to act as a bodyguard for Rachel Wallace. Ms. Wallace is an outspoken gay, feminist author whose new book is bound to antagonize a good number of people. The advance reading copies have barely been distributed when Wallace begins to receive threats against her life.

As a determined feminist, Wallace seems suspicious of most men and hates the thought that she might be dependent upon one, even for her own safety. Spenser is a large, tough guy and Wallace makes some snap judgments about him that are not strictly justified. She also does not appreciate Spenser's brand of humor and the relationship gets off to a somewhat prickly start. Wallace lays down some basic ground rules, but Spenser makes it clear that he will defend her as he sees best, irrespective of her directives.

Early on, Spenser acts in a way that displeases Wallace and she fires him. Shortly after that, she is kidnapped, apparently by the people who threatened her initially. Spenser is angry with himself, even though he was no longer on the job, and his moral code demands that he rescue her. This will take some doing.

This is an intriguing plot with one of Parker's better casts of characters. Rachel Wallace is an well-drawn character and watching her and Spenser spar with each other is a lot of fun. There are other interesting characters as well, although Spenser's sidekick, Hawk, is only briefly mentioned and does not make an appearance. Rereading the book reminds one of what a great series this was in its prime and makes a fan of the series more than a little sad that many of the later books did not begin to measure up to this one.
Posted by James L. Thane at 2:14 PM