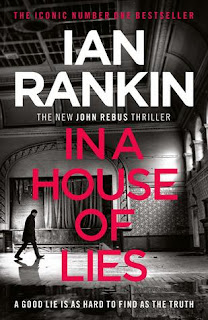 This is the twenty-second novel featuring Scottish police detective Inspector John Rebus. It appears thirty-one years after the first book in the series, Knots and Crosses, and Rebus, who was no spring chicken when readers first met him, has been allowed to age in real time. He's now nearing seventy and is in poor health with COPD. He's had to give up liquor and cigarettes, and even worse, he's been forced to retire. He spends a lot of his time now walking his dog, Brillo.

This presents the author with a difficult problem that's been confronted by other authors who have allowed their series characters to age over time, and in particular one also thinks of Michael Connelly's Detective Harry Bosch who is basically the same age as Rebus. What do you do with a beloved character who has obviously lost much of his physical prowess and who has been pushed to the sidelines by his department's retirement regulations?Both Rankin and Connelly have attempted to keep their protagonists engaged by finding roles that they could legitimately fill in retirement and by giving them younger sidekicks who can do much of the heavy lifting, especially in an official capacity. The problem with that approach, though, is that a book billed as "An Inspector Rebus novel" really becomes a novel featuring Siobhan Clarke, Malcolm Fox and others, with Rebus forcing himself into their investigation as much as he is able. In the end, he still plays a fairly consequential role in this book, but it's not nearly the same as the Good Old Days when he was basically carrying the story solo.The book opens when a car is found concealed at the bottom of a gully in the woods. In the trunk is the body of a man whose ankles have been handcuffed together. The case is assigned to Rebus's former protege, Siobhan Clarke, and when the news of the discovery is reported, Rebus contacts Clarke, suggesting that he might know who the victim is.Sure enough, the body turns out to be that of a private investigator who was reported missing years earlier while on a very sensitive case. The investigation into his disappearance was worked by Rebus and others but went nowhere. The victim's family has long maintained that the police botched the investigation and covered up critical details to avoid embarrassing themselves and others. Now that the body has finally surfaced, there will be a new investigation into the crime itself and into the circumstances surrounding the original investigation, which may not bode well for Rebus and for some of his former associates in the department.Clarke is having problems of her own with the ACU--the branch of the department that investigates police corruption. She's also getting mysterious phone calls and asks Rebus for his assistance. Rebus also manages to insert himself into the new investigation and is soon working with Clarke and his old adversary Malcolm Fox in an effort to sort out some very complex developments both old and new. It's a good story with a heavily-layered plot and the principal characters are by now old friends. I enjoyed reading it but feel somewhat sad about the fact that Rebus has deteriorated to such an extent and is no longer front and center. Having finished In a House of Lies, I feel almost obligated to go back and reread one of the earlier novel is the series when he was younger and in full vigor.
Posted by James L. Thane at 1:38 PM No comments: 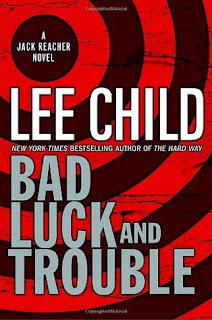 The eleventh entry in the Jack Reacher series opens with a man being thrown out of a helicopter three thousand feet over the California desert. Shortly thereafter, Jack Reacher receives a rather innovative call for help from Frances Neagley, who was once a member of an elite Army team headed by Reacher. The eight-member team was very skilled and very close, but they gradually lost touch as they all left the military and transitioned into civilian life.Post-Army, most of the team members have become private investigators or have joined security teams of one kind or another. But now one of them is dead and several others are missing. Reacher and Neagley team up in an attempt to locate the rest of the team and to discover what kind of trouble they might have gotten into. One thing is for sure, though, nobody messes with Reacher's team without paying a very high price.The hunt will take the surviving members of the team from California to Las Vegas and back and will pull them deep into a terrorist conspiracy that has severely compromised national security. Reacher is in fine form and it's fun to see him working with the rest of this team. The conspiracy unfolds very slowly at first and then explodes into a major crisis in which Reacher will have to make some very tough choices. All in all, another very satisfying page-turner in a great series.
Posted by James L. Thane at 2:02 PM No comments: