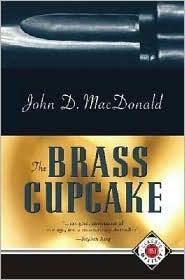 The Brass Cupcake is John D. MacDonald's debut novel, and it provides a template for many of the others that would follow. The protagonist is a guy named Cliff Bartells, who might serve as an early version of MacDonald's great series hero, Travis McGee. Bartells was on the police force of the town of Florence City, Florida, but he was basically driven off the force for being too honest. Unlike virtually every other member of the city's totally corrupt police department, he refused to take bribes from the local mobsters for looking away from their illegal activities.Bartells now works as a claims adjustor for an insurance company. When an elderly woman, visiting Florence City from Boston, is murdered and robbed of $750,000 worth of jewelry insured by Bartell's company, it's his job to get it back. This is somewhat familiar territory for Bartells in which professional thieves rip off somebody's jewels, then use underworld connections to contact the insurance company and sell the jewels back for a fraction of the amount for which they were insured.Bartells has been the middleman in these sorts of transactions before, but this time it's different because there's a murder involved. Professional thieves don't usually murder people and it throws off the whole equation and makes Bartell's job that much harder and infinitely more dangerous. The local cops, who still hate Bartells, don't want him mucking around in their investigation, and Bartells must also contend with the beautiful blonde heiress who stands to inherit the murdered woman's estate. And, of course, there are a number of other shifty and inscrutable characters as well.Municipal corruption was a standard theme in a lot of MacDonald's books, most of which are populated by tough, relatively incorruptible protagonists like Cliff Bartells who may bend the rules here and there, but always in the service of a good cause. It's always fun to watch someone like Bartells come up against bad guys of various stripes in MacDonald's novels, and this book sets a high standard in that regard.As is the case with a lot of MacDonald's work, read forty or fifty (or in this case, seventy) years down the road, some of the sex scenes are pretty awful, and the treatment of the female characters is at times cringe-worthy. Still, this is an excellent hard-boiled novel, and it's very much a book of its time. Over the course of the thirty-five years to follow, MacDonald would write a lot of really great crime novels, and The Brass Cupcake was a great beginning to his career.
Posted by James L. Thane at 4:18 PM No comments:

An Intense and Complex Novel from William Bayer 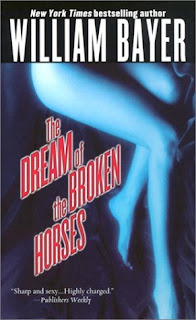 At the center of this intense and complex psychological thriller is a forensic sketch artist named David Weiss. David is a native of Calista, a city in the Midwest, but he has lived for years in California. Twenty-five years earlier, a wealthy divorcee named Barbara Fulraine and her young lover were shotgunned to death in the seedy Flamingo Court motel on the outskirts of Calista. Fulraine was a troubled woman whose young daughter had been kidnapped several years earlier and is presumed dead. Her lover was a teacher at her sons' private school, and she was also having an affair with a local mobster. David Weiss's father was the therapist who was treating Barbara Fulraine and attempting to untangle all her erotic dreams and activities without becoming entangled in them himself.

If that all sounds pretty complicated, that's just for openers. For reasons of his own, David has always been haunted by the Flamingo Court murders. The killer was never identified and captured, and David's father committed suicide shortly after the murders. Now, a quarter of a century later, David returns to his hometown, working as a sketch artist for a TV network, covering a sensational local murder trial.

It's immediately clear, though, that Weiss is far more absorbed by the murder case from twenty-five years earlier than the one he's been hired to sketch, and he finds himself drawn inexorably back into the Calista of his youth, with all its dark, ugly and still dangerous secrets. His skill as a forensic sketch artist, particularly his uncanny ability to empathize with witnesses, may enable him to shed new light on a very old mystery. But it may also take him down some roads better left untraveled.

This is an intricately-plotted novel with well-drawn characters and an interesting plot. The story did seem to drag at points, but watching David Weiss fall increasingly under the spell of this old murder case was, at times, riveting. I'm giving this book 3.5 stars rounded down to 3 because I thought that after 450 very densely-packed pages, the climax was a bit disappointing and wasn't quite the payoff I'd been hoping for. Still, an enjoyable read. 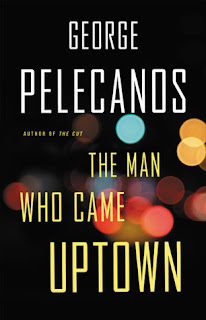 This is another excellent novel from George Pelecanos, who's been spending a lot of time in recent years working in television and consequently writing fewer books. On the one hand, I've really admired his work on programs like "The Wire," "Treme," and "The Deuce," but I've really missed having new books from him on a more regular basis, particularly when they're as good as this one.At the center of the book is a young man named Michael Hudson who is now in prison thanks to a stupid mistake, or perhaps a couple of them. (As a hint, it's probably a bad idea to borrow your mother's car for the purpose of committing an armed robbery.) In prison, though, Michael's life is changed dramatically when he's introduced to the world of reading by Anna, the young prison librarian.A new world opens up to Michael through the books that Anna is giving him, and then suddenly and unexpectedly, he's freed from prison when the principal witness against him changes his testimony. This is thanks to the intervention of a private investigator named Phil Ornazian who is barely making ends meet with his regular job. But Ornazian is supplementing his income by ripping off criminals, principally pimps who are exploiting women, and naturally he's going to expect something in return for having secured Michael's freedom.Determined to get his life on the right track, Michael takes a job washing dishes in a D.C. restaurant, but he continues to read in his spare time and dreams of slowly building his own library. But then Phil Ornazian shows up, insisting that Michael's marker is due. Ornazian wants Michael to be the wheelman in a robbery he's planning to commit and his demand forces Michael to make some very hard choices.In addition to being a great character study and a very compelling story, this book is a testament to the joys and the redemptive power of reading, and through Anna and Michael, Pelecanos takes the time to sing the praises of some excellent novels. The book is a bit shorter than some of the author's earlier work and it's so addictive that you find yourself wishing that it could have been longer. Most of all, it leaves you hoping that Pelecanos will not wait nearly this long again before writing another.
Posted by James L. Thane at 3:59 PM No comments: 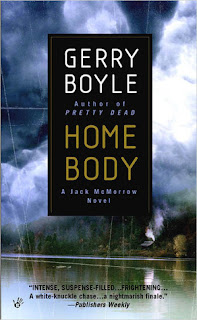 Veteran newspaperman Jack McMorrow is now working as an editor at a small Maine newspaper. The job doesn't pay much, but Jack is there for the health insurance. His long-time girlfriend, Roxanne, is pregnant with their first child and, obviously, they need the coverage. But while Jack awaits the birth of his own child, he becomes entangled in the problems of a young street kid named Rocky.
As the book opens, Jack rescues Rocky from a beating. Rocky is a small kid, totally defenseless, and thus a natural target for bullies. Some other street kids are kicking the daylights out of him when Jack chases them away and saves Rocky. Rocky obviously has no business being out on the street, but he won't tell Jack where his home is. Jack attempts to take the kid to the emergency room, but Rocky bolts and runs away.
Later that night, Rocky shows up at Jack's house which is out in the middle of nowhere. It's snowing; it's brutally cold; Rocky is not dressed for the elements, and he's obviously in trouble. Jack is home alone that night and so brings Rocky into the house, feeds him, gives him a change of clothes and tells him to sleep on the couch.
The next morning, Rocky runs off again and when a couple of sheriff's deputies arrive to investigate the situation, they strongly suggest that Jack is some sort of pedophile who invited Rocky into his home so that he could molest him. Jack insists that he did no such thing and that he was only trying to save the kid, first from a beating and then from freezing to death. The deputies aren't sure whether to believe him or not and then the poor kid's clearly abusive stepfather shows up, repeating the charges and threatening to kick the crap out of Jack.
At this point, almost anyone else would step aside and let the authorities handle the matter. But Jack is genuinely concerned about Rocky and fears that no one else really cares about him. It's clear by now, at least to Jack, that there's some very scary reason why Rocky is so afraid to go home to his mother and stepfather, and Jack is determined to discover what that might be. In the course of doing so, he may place his own life, and the future of his yet-unborn child on the line.
This is a very absorbing mystery that demonstrates what can sometimes be the costs of acting with good intentions. Jack McMorrow is clearly a decent guy, and that decency again gets him into deep trouble here as it has in earlier books. Another very good entry in a great regional mystery series.
Posted by James L. Thane at 11:44 AM 2 comments: