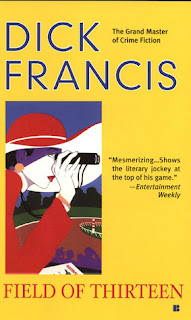 This is a collection of thirteen short stories that were originally published in a diverse number of newspapers and magazines, including Sports Illustrated and The Times of London. Most are set in the UK, but a couple are set here in the U.S. Virtually all of them have a connection of some sort to the world of horse racing.The stories are very well-crafted and in most cases involve a twist of fate that leaves someone's carefully-laid plans in ruins. They are populated by a lot of grifters and innocent victims, and there's a fair amount of wry humor running through them as well. The stories have held up very well over the years, and this collection should appeal to a lot of readers as well as to fans of Dick Francis, who certainly should not miss this one.
Posted by James L. Thane at 3:39 PM No comments: 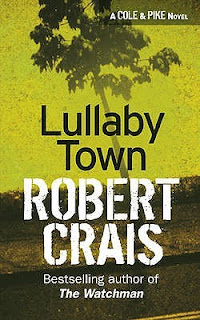 After muddling around a bit in the first two books, Robert Crais begins to hit his stride with the third entry in the Elvis Cole series. He's dialed back the constant--and what I thought was often inappropriate--humor and produced a fairly gripping novel. The humor hasn't disappeared, to be sure, but in this book it's not nearly as jarring.The case seems pretty straightforward, at least initially. Elvis is introduced to a big league movie director named Peter Alan Nelson. Nelson is awfully full of himself and comes off as a total jerk. Years ago, he was briefly married and fathered a son. But he decided that being a husband and father really didn't suit him and so he abandoned his wife and child. The wife divorced him and disappeared with the son. Nelson has heard nothing of either of them in years.Now he decides that he really wants to meet his son and he hires Cole to find the boy and his mother. Nelson is such a jerkoff that Cole almost refuses to work for him. But Nelson does seem sincere in his desire to meet the boy and so Elvis reluctantly agrees.Finding the woman and her son is really no problem at all. But once having found her, Cole discovers that she's mixed up in some very serious trouble. This is another case where I think that the tease on the back of the book gives away way too much, and I'm not going to go there. Suffice it to say that Cole decides that he needs to attempt to extricate the woman from her problems before notifying his client that he's completed his mission. This will get Cole himself into some serious danger, and before it's all over, a lot of blood is going to get spilled. A very good read with a great climax.
Posted by James L. Thane at 3:21 PM No comments:

First published in 1953, this is a novel in the classic pulp school. A gang of kidnappers abduct the young daughter of a very wealthy Connecticut man and take along the girl's nanny as well. The gang asks $500,000 in ransom money, which would have been more than a small fortune in that day and age, and goes into hiding along with the hostages in a beach house on Long Island during the off-season when no one else is around.The gang members have a very elaborate plan for collecting the ransom and returning the daughter, but they are divided about whether or not they can let the nanny go as well. There are other tensions on top of that: One of the gang members is a woman, who may or may not be in the process of switching her affections from one of the male gang members to another. Additionally, the nanny is a delectable young woman, and that won't help matters either.These people are all cooped up together in a small house for several days as the plan unfolds and inevitably tempers will boil over, divisions will erupt, and the question will be whether the gang can stick together long enough to collect the spoils of their effort.This is a pretty good example of the genre, and it will remind some readers of Richard Stark's Parker series, which came along a little over ten years later. The Parker novels are generally much better done, but for fans of old-school, hard-boiled crime fiction,The Snatchers is worth seeking out. A couple of years ago, Stark House re-released the book in a single volume along with White's Clean Break, from which the movie "The Killing" was made. That is also a good read and so both books are now readily available again.
Posted by James L. Thane at 3:29 PM No comments: