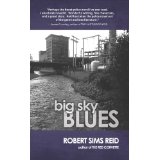 This excellent police procedural, published in 1988, was the first book from Robert Sims Reid, another one of those writers who, sadly, has not received nearly the acclaim that he deserves.

Set in the fictional town of Rozette, Montana, it features Ray Bartell and Paul Culp, two patrolmen who are partnered together several nights a week. Bartell is the more quiet and thoughtful of the two and serves as the department's hostage negotiator on those rare occasions when such services are needed. Culp is a veteran of the Vietnam War and carries his share of memories. But both men are fairly tight-lipped and each keeps his own counsel, which may explain why their partnership succeeds.

Like a lot of other cops, Culp is divorced. Bartell is married to an attractive wife named Helen. They have a teenage daughter who does not get along with her mother, and Bartell's relationship with Helen has reached a point where they're basically drifting along, without a lot to say to each other.

On most nights, the life of a patrolman in Rozette is deadly dull and amounts to responding to the occasional false alarm, rousting homeless people who are squatting where they are not wanted and generally watching for trouble that rarely happens. But then one night, Bartell and Culp are making their rounds and discover a small fire in an abandoned building. Their investigation into the seemingly minor incident suddenly turns explosive in a way that neither Culp nor Bartell could have anticipated and which will change their relationship and both of their lives forever.

Reid, who was himself a police officer, captures brilliantly the tedium of the job and the sudden moments of frantic action and terror that can punctuate it. His cops sound and feel authentic, and he plumbs not only the nature of their jobs but the effects that the job can have on their lives outside the department. James Crumley, no slouch himself in the crime fiction department, describes Big Sky Blues as "Perhaps the finest police novel I've ever read." High praise indeed from one of the masters.
Posted by James L. Thane at 3:38 PM No comments: 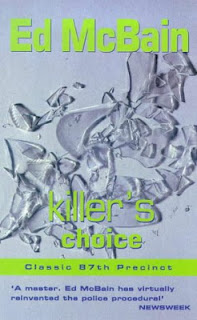 This is the book in which Ed McBain adds Cotton Hawes to the cast of detectives who populate the 87th Precinct. As Hawes comes on board, a young woman named Annie Boone is shot and killed while working as a clerk in a liquor store. The store is then totally trashed and the owner seems more concerned about the damage to his stock than the death of his employee.

Annie, a divorced mother of a young daughter, seems to be something of a chameleon. Virtually everyone that the detectives interview has a radically different impression of the woman, and without knowing exactly who she was, it's going to be awfully difficult to catch her killer. Then, as the investigation progresses, Roger Havilland, one of the detectives, is also murdered. This increases the pressure to find the killer or killers and Steve Carella, Meyer Meyer, Bert Kling and Hawes, the new addition to the team must follow a very slim trail of evidence in their effort to find a solution to the crimes.

This is a quick, fun read, one of the better of the earlier books in the series. It's fun to watch the interaction with Hawes, the new guy, especially as he makes a nearly catastrophic mistake early on in the investigation. Any fan of the 87th Precinct will want to find this one.
Posted by James L. Thane at 4:42 PM No comments: 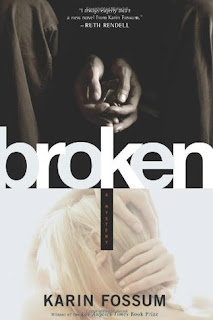 This unconventional novel by Karin Fossum will delight some readers and, I suspect, confuse and frustrate others. Fossum, a Norwegian, is perhaps best known for her crime fiction series featuring Inspector Konrad Sejer. Here she attempts something completely different and unusual.

As the book opens, a middle aged female writer whose name we never learn, is cowering behind her curtains one night, looking down her driveway at the long line of characters who are waiting for her to tell their stories. The weight of the burden the characters impose upon her is almost too much to bear and she turns to drink and pills to get her through the night.

On this night, though, she awakens, panicked, in the middle of the night to find a man in her room. One of her upcoming characters has jumped the line and invaded her bedroom. He insists that the writer tell his story now. The writer tries to explain that the man must wait his turn, but he's worried because the writer is getting older and is not taking very good care of herself. He's desperately afraid that she might die before getting to him and that his story will never be told.

Reluctantly, the woman agrees to his request, and the man comes to life on her computer as Alvar Eide. He's single, in his early forties, and works in an art gallery. He's a very quiet, mild-mannered man who has difficulty relating to other people. But his life is well-ordered and he is content with it. Then one bitterly cold afternoon a young female drug addict stumbles into the gallery in an effort to get warm and Alvar does something totally out of character. Rather than immediately insisting that she leave the gallery, he offers her a cup of coffee, and this simple act will change the course of his life.

As the story progresses, Alvar continues to periodically interrupt the writer. He is concerned about the way he is being portrayed; he fears for what might happen to him. The writer patiently explains that once things are set in motion, she has little or no control. She must follow the story wherever it leads her, and Alvar must accept the consequences. Alvar is not sure he likes this at all, but watching his progress and observing his interaction with his creator is a fascinating experience.

Writers often say that characters sometimes assume a life of their own and I suspect that this is a difficult thing to grasp for people who are not writers and who assume that writers have complete control of the stories they write and the characters they create. But while a writer might consciously plan out a book to the last detail, that carefully constructed plan often cannot account for the actions of a mischievous subconscious.

Perhaps only another writer who has experienced that moment when, seemingly out of nowhere a character says or does something that takes you completely by surprise, can really appreciate what Fossum has done here. Which is to say that I enjoyed this book immensely, but I can understand why others might not be as enthused about it as I am.
Posted by James L. Thane at 3:02 PM No comments: