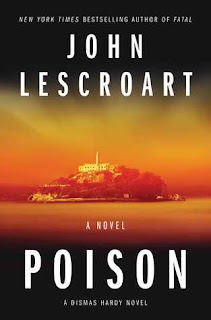 This is a fairly decent entry in John Lescroart's long-running series featuring San Francisco defense attorney Dismas Hardy and the cast of characters that has grown up around him through the years. Hardy has aged through the books, and is recovering from a couple of gunshot wounds that he suffered on his last case. He's contemplating retirement but then a former client, Abby Jarvis, is charged with poisoning her boss, Grant Wagner, the owner of a successful family business. Dismas feels compelled to take Abby's case, at least initially, even though the cops and the D.A. seem to think that they have an iron-clad case against her.

The early books in this series are among my favorite legal thrillers of all. They are smart, witty, and hugely suspenseful. This book, though, is much more of a police procedural and there are relatively few courtroom scenes. The plot at once seems both thin and convoluted and didn't have the sense of urgency that so many of the earlier books did. And, I confess, I'm growing a bit tired of Hardy's children who are now young adults and who seem to keep blundering into these novels in ways that don't make a lot of sense to me. Hardy's wife, Frannie, is also something of a pain in this outing.

Hardy will persevere and attempt to sort through all the complicated issues that this case presents, while at the same time attempting to deal with the family drama that results. I enjoyed the book, but couldn't help comparing it to the earlier books in the series that got my blood pumping a lot more than this one did. 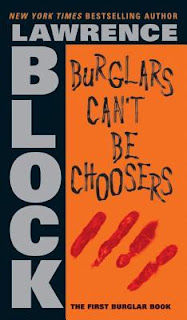 This is the first book in Lawrence Block's "Burglar" series featuring Bernie Rhodenbarr. Block is perhaps best known for his Matthew Scudder series which is often dark, violent, and humorless. Like the Scudder series, the Bernie books are also set in New York City; otherwise they're the polar opposite of the Scudders. They're light, not at all violent, and often hilariously funny. The fact that the two series could be written by the same author is simply another testament to the skill of Lawrence Block (not that he needs any further testament in this regard.)Bernie is a gentleman in the truest sense. He only burgles places that he expects to be empty and he would never commit any act of physical violence against his victims. He generally chooses well-heeled targets who can afford the losses. He's an expert at picking locks, and is one of the few in his profession who can defeat the top-of-the-line, state-of-the-art Rabson lock which rich people often choose as their principle line of defense against burglary. He never makes a mess, and leaves the places he burgles exactly as he found them, save for the items he's taken with him.Bernie only does a few jobs a year, which allows him to live comfortably. But in almost every recorded adventure, Bernie stumbles across a body. The cops discover the body, occasionally with Bernie still on the premises, and immediately assume that he is the killer. Bernie then must use all his skills and intelligence to get himself off the hook and point the police at the Real Killer. He's a very charming and appealing protagonist--just the sort of guy that a crime fiction fan would love to spend an evening with every once in a while.In this case, Bernie takes a job for hire. Someone offers him $5,000 (still a considerable sum of money when the book first appeared in 1977) to break into an apartment and steal a small blue box. Bernie has no idea what might be in the box, only that it's supposed to be in an antique roll-top desk. The man who lives in the apartment is supposed to be out at the theatre for the evening.Bernie gets into the apartment without any difficulty and goes directly to the desk. He opens that without a problem either, but the box is nowhere in sight. While Bernie is still standing there, pondering the situation, two cops arrive at the door. Someone has reported hearing a noise in the apartment and they've arrived to investigate.Of course, Bernie is mystified. He hasn't made a sound since he arrived but, nonetheless he's in deep trouble. Fortunately, one of the cops recognizes Bernie and when Bernie offers them a quick thousand dollars, they agree to let him go and pretend they never saw him. But then one of the cops goes to use the john and discovers a dead body in the bedroom. Suddenly the entire picture has changed and before the cops can react, Bernie rushes out the door and goes into hiding. A city-wide manhunt is soon on, with Bernie's picture splashed across the pages of all the papers, identifying him as a cold-blooded murderer. With that, the race is on and Bernie will have to work fast and furiously to get out of this mess.I've really enjoyed all the books in the series, along with everything else that Block has ever written. I reread this book this week for one of my book clubs and really enjoyed Bernie's origin story all over again. Now I just have to somehow find the time to go back and reread a lot more of them.
Posted by James L. Thane at 4:13 PM No comments:

HOW BEAUTIFUL THEY WERE Is Another Brilliant Novel from Boston Teran 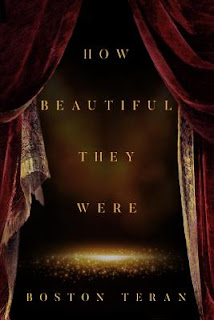 I’m always tremendously excited whenever I get my hands on a new novel by Boston Teran. I first fell in love with the author’s work several years ago when one of my book clubs picked The Creed of Violence as our monthly selection. The book was a revelation—intelligent and beautifully written with a compelling plot and unforgettable characters.I quickly discovered that the same could be said of any of Teran’s other novels, and that continues to be the case with the author’s latest book, How Beautiful They Were. This novel completes Teran’s “The Defiant American Series,” which began with The Cloud and the Fire and A Child Went Forth.The three novels are set in the middle of the Nineteenth Century, when the United States was still being formed and when the future of the nation could have realistically taken any number of turns. The books are not chronological in order, but together they paint a wonderful portrait of the forces shaping the nation at that time and raise several critically important questions about the country’s past, present and future.This latest novel is set in the world of the theater and begins in London where an actor named John James Beaufort is forced to flee the country for reasons that I won’t give away. Like so many others of his day, he makes his way to New York and there attempts to reinvent himself as an actor named Nathaniel Luck.With a disfigured playwright named Robert Harrison, Luck forms Colonel Tearwood’s American Theatre Company. The two assemble a company of actors and begin searching for audiences. In particular, they hope to write and produce plays that will speak to the everyday lives of the working-class people who are their principal audience. The enterprise enjoys some success, but the company and the individual actors, Luck in particular, are soon confronted by the brutal realities of the American economy and society of the day and by the secrets that they all carry with them.It’s impossible to do justice to a book this good. The characters are so finely drawn that the reader cannot help but become caught up in the ebb and flow of their lives. You share the joy of their triumphs and your heart breaks when tragedy overwhelms them. This is a very wise book with much to say about the theater and the world beyond it. Indeed, all the world is a stage, and this book is as beautiful and will be as enduring as the characters who inhabit it. Five stars are not nearly enough.
Posted by James L. Thane at 3:03 PM No comments:

Freelance reporter Jack McMorrow is minding his own business, doing an article for a travel magazine about Benedict Arnold's ill-fated expedition against Quebec in 1775, when he stumbles onto a minor mystery in the small town of Scanesett, Maine. A man on a bus tour headed for Quebec has failed to return to the bus which has stopped briefly in the small town. The bus driver waits as long as he can before heading off down the road, leaving the missing man, P. Ray Mantis, behind.The local police chief, a small-minded man who hates reporters, seems totally unconcerned about the fact that a man has gone missing in his community. But Jack sees a potential story that he might be able to sell, perhaps to the Boston Globe, and so in and around his research about Benedict Arnold's expedition, he begins a search for the missing Mantis.Jack's investigation gets him tangled up with a mentally-challenged brother and sister who may have briefly hidden Mantis in their ramshackle home. The two seem to think that both Mantis and Jack McMorrow are somehow connected to the CIA, and this mistaken impression leads a trio of violent low-lifes to take after McMorrow.Jack's life is already complicated at the moment because his girlfriend, Roxanne, is down in Florida, attending to her ailing mother and is having a bad time of it. Jack's normally reliable neighbor, Claire Varney is also down south with his wife, recovering from surgery, and so Jack is left entirely alone.As the book progresses, Jack alternates between doing the research for his article on Benedict Arnold and his hunt for the missing Mantis. As usually happens when Jack relentlessly pursues an investigation like this, he's ultimately going to find himself in big trouble and will need all of his skills if he's going to escape it. Another good addition to an excellent regional mystery series.
Posted by James L. Thane at 1:09 PM No comments: