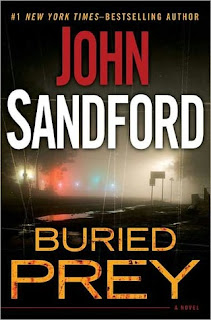 This is the twenty-first John Sandford novel to feature Minnesota detective Lucas Davenport, and it's one of the best books in a truly great series.

Twenty-five years ago, Davenport was a beat cop with a taste for fine clothes, fast cars and attractive women. He was also smart, ambitious and determined to excell, preferably as a detective, but if not, perhaps as a lawyer. He gets the chance to prove himself when two young girls go missing. Lucas, along with some other patrolmen, is assigned temporarily to plain clothes to assist in the investigation.

Davenport is determined to make the most of the opportunity and he attracts the attention of a powerful patron who's impressed with Davenport's early work on the case. Sadly, though, the missing girls are never found. A suspect is identified and the case is declared closed, although Davenport is not entirely comfortable with the official solution to the crime.

In the years that follow, Lucas becomes a local legend and becomes the most brilliant detective the state of Minnesota has ever produced, occasionally bending the rules and sometimes meting out his own rough justice, but always getting results. Through the years, he has risen through the ranks and is now head of the state's Bureau of Criminal Apprehension. And finally, after all that time, the bodies of the two missing girls are uncovered, buried under a concrete slab in a building that is being demolished.

Davenport finally has the chance to revisit the crime that got him started as a detective and the solution to which has always bothered him. This time, he will let nothing stand between himself and the truth, no matter the consequences.

The consequences are indeed painful, and those readers who have followed this series since Rules of Prey are in for a great ride. Like all of Sandford's books, this one has great comic moments that never detract from the serious business at hand. It has some great action scenes, a very interesting climax, and in the end, it may just break your heart. But once you start it, you won't put it down and you'll never forget it.
Posted by James L. Thane at 5:38 PM No comments:

This is the seventeenth and allegedly last book in Ian Rankin's excellent series featuring Edinburgh Inspector John Rebus. Rebus was already nearly sixty years old before his creator was stunned to discover that sixty was the mandatory retirement age for detectives in Scotland. Accordingly, this book finds Rebus in the autumn of the year and of his career as well.
Rebus has ten days do go when Alexander Todorov, a Russian poet, is brutally murdered after a reading. To all appearances Todorov was the victim of a run-of-the-mill mugging, but Rebus and his long-time understudy, Siobhan Clarke, discover a number of anomalies that make them wonder if the case is really as simple as it appears.
Todorov's murder coincides with the visit of a group of Russian businessmen who are looking to make large investments in Scotland. Naturally, the local politicos, bankers and other bigwigs fear that the killing might unsettle the Russians and discourage their interest, and inevitably the Powers-That-Be want the case buttoned up and swept under the carpet.

Those who have followed this series know full well that John Rebus is not a man who usually follows orders with which he does not agree. And so instead of going quietly into that good night, Rebus presses the investigation full-bore, alienating large numbers of Very Important People in the process, including his own superiors. This too, is hardly unheard of for Rebus, and when a second murder occurs, Rebus is certain that the case is more complicated that it appears on the surface. The case then takes a particularly interesting turn with the appearance of Rebus's long-time nemesis, Big Ger Cafferty.
This is a very good book with a complex and interesting plot, in what has been an outstanding series. And it's more than a little bittersweet, watching Rebus count down the days to his retirement while he wonders if he can possibly close his last case before he is put out to pasture. I saw Ian Rankin at an event a few months ago, and as any of his fans will imagine, there were a lot of people in the audience pleading with him to somehow bring the character back. Rankin seemed as reluctant to let go of Rebus as his fans were, and so I'm hoping that this will not really be the last book in the series. But if it should be, Exit Music is an excellent valediction for one of the truly great characters in detective fiction.
Posted by James L. Thane at 1:11 PM No comments: