Don Winslow scores again with Savages. Two Laguna Beach buddies, Ben and Chon, operate a top-of-the-line marijuana business. Ben is a laid-back environmentalist and philanthropist; Chon is an ex-Navy Seal and former mercenary. They grow their own product, which is much desired, and they have a loyal and exclusive clientele. Both Ben and Chon are in love with the beautiful Ophelia, a spoiled local rich girl who loves both of them in return.

There have been occasional minor threats to the business, but they have been quickly dealt with by Chon. Now, though, a Mexican cartel has decided to take over Ben and Chon's operation and the Mexicans also insist that Ben and Chon continue to grow the product for them, effectively becoming the cartel's employees. When Ben and Chon refuse, the cartel kidnaps Ophelia, insisting that they will hold her captive until Ben and Chon agree to the cartel's "offer." Should they continue to refuse, gruesome things will be done to Ophelia. Ben and Chon, determined to rescue Ophelia and to preserve their independence, declare war on the cartel.

"Savages" is, by turn, very funny and extremely violent. Winslow who wrote perhaps the best fictional account of the drug trade ever published, the classic The Power of the Dog, is in great form. As usual, he captures brilliantly the Southern California lifestyle while at the same time skewering the misadventure that is the "war" on drugs. This is not a book for the faint of heart, but for anyone who might not yet have discovered Winslow, it's a great place to start.

Donald Lam, On Top of the Heap 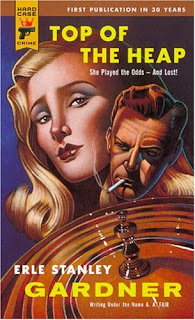 I first encountered Erle Stanley Gardner, writing as A. A. Fair, while a young boy growing up in the wilderness of northwestern Montana. My father was a big fan of Gardner’s Perry Mason series, but occasionally he brought home one of the Fair books, and eventually he would pass it along to me if he deemed the subject matter appropriate for a lad of my tender years. Of course the ones I most looked forward to were the ones that he did not pass along and that I had to read on the sly.

I can’t remember into which category Top of the Heap might have fallen. There is a stripper in the book, along with a couple of other women of questionable virtue, and so I’m betting that this is one that Dad didn’t recommend.

The A. A. Fair series featured a team of detectives, Donald Lam and Bertha Cool. Lam was the brainy, pint-sized detective who did all of the work, while the bejeweled, avaricious, and considerably overweight Bertha, who had founded the agency, mainly sat behind the desk and gave her partner grief. Donald had a gift when it came to the fairer sex, and women usually fell for him fast and hard. As a small boy myself, I found it very encouraging to think that a guy who was only about five-six and 135 pounds could still do so well with the ladies.

Occasionally, though, Donald would encounter a woman who, for some inexplicable reason, was immune to his charms and needed to have the living bejesus scared out of her. At that point, he would call in the reinforcements, and Bertha would bestir herself and swing into action. Before long, the woman in question would be reduced to a sniveling mass of quivering flesh, willing and anxious to provide any information or assistance that the firm of Cool and Lam might require.

As I recall, these books usually followed a predictable pattern. A new client would appear in the office with a job for the agency. The client always had a story of some sort and usually offered a large bonus for quick results. Bertha, who handled the money and the administrative details, would grow wide-eyed at the apparent simplicity of the assignment and at the size of the potential bonus.

She would then call Donald in and give him instructions. Donald, of course, would immediately recognize that the client was not on the level and that something much deeper was going on. Bertha would instruct him to ignore his doubts and do the job as quickly as possible so that the agency could collect the bonus. Donald would generally agree, but then once out of the office would follow his own intuition.

Inevitably, of course, the client was always lying; there was always something deeper and very sinister going on, and again inevitably someone would get murdered. Determined to ferret out the truth, Donald would always be up to his neck in trouble with the police and with a furious Bertha who was breathing down his neck, often threatening to dissolve the partnership and kick Donald out. But then in the nick of time, Donald would solve the case, often generating a bigger fee than Bertha had ever imagined, and in the end everyone was happy again until the next client walked into the office.

Top of the Heap falls into the middle of the series and follows the usual pattern. By now Donald has become a partner in the agency when a wealthy client appears. The client wants the firm to identify and find a couple of women the client met casually a few nights earlier so that they confirm that they were with him on the evening in question. Their evidence will provide the client with an alibi in a relatively minor matter and of course the client offers the usual large bonus for quick results.

Although Donald advises against it, Bertha eagerly agrees to take the case. Donald quickly discovers that the client is a fraud and that he desperately needs an alibi for something much larger than the minor matter he alleges. The book takes off from there and involves gangsters, crooked gamblers, lonely women, wealthy bankers, suspicious miners and two or three murders in a plot that’s almost too convoluted to follow, let alone describe.

Suffice it to say that the fun in these books always lay in watching Donald Lam work, rather than in the plots themselves. As in the Perry Mason series, Gardner here too often wove together impossible and totally implausible plots and then had either Mason or Lam sort things out in the last few pages in a way that left the reader shaking his head trying to follow it all.

The A. A. Fair books have been out of print for years and are virtually impossible to find anymore (unless, of course, you inherited your father’s collection), and Top of the Heap may be the only entry that is readily available. Fans of crime fiction, particularly those who enjoy pulp fiction would probably enjoy reading this book as an example of a series that was once enormously popular, even though it is now hopelessly dated.