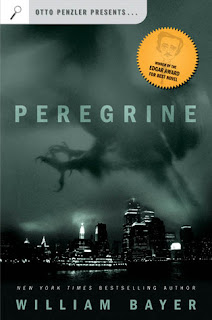 Peregrine, which won the Edgar Award for Best Novel in 1982, is the book that introduced New York City homicide detective Frank Janek. Divorced for a number of years, Janek lives alone and repairs old accordions in his spare time. But most of all, Janek is devoted to his job and gets consumed by this first case which has to be one of the oddest in the history of crime fiction.

The book opens when a reporter for a New York City TV station, Pamela Barrett is struggling to hold on to her job. By chance, she happens to be at the ice skating rink at Rockefeller Center when a giant peregrine falcon drops out of the sky and knocks a young female skater to the ice. The bird then slashes the woman's throat and flies off into the sky.

Amidst the panic, Pam notices that some Japanese tourists have been filming the skaters and captured the attack on film. She persuades them to give her the film, races back to the studio and reports the scoop of the year. She does this so successfully that she becomes an overnight sensation, breathlessly reporting to terrified New Yorkers the latest news about the killer bird.

Most people initially assume that the attack was just a bizarre act of nature but then the falcon strikes again, killing another young woman and it now appears that some madman has actually trained this bird to kill human beings and is controlling the bird's action. Pam thus takes a deep dive into the world of falconry, attempting to discover how the bird could be trained to kill a human and, more important, who is responsible for the bird's actions.

Enter Frank Janek, who's in charge of the police investigation of the murders. He too would like to know who trained and is controlling the bird. But Janek and Pam are adversaries in the sense that each wants the other to freely share information, but neither of them wants to do so. Janek wants to solve the crimes; Pam wants to maintain her ratings and build her career. She wants credit for bringing the falconer down.

As the book progresses, we meet the killer and learn a great deal about falconry. The book devolves into a psychological study of all three of the main protagonists, but especially the killer who is seriously weird.

The book has an interesting premise, but forty years after its original publication, it doesn't have the impact that it might have had originally. Or, to be fair, it didn't work for me as well as I might have hoped. The book seemed to get bogged down a bit with all the psychological analysis, and the premise requires perhaps too much a suspension of disbelief. The climax is more than a bit bizarre and left me shaking my head. That said, I enjoyed the character of Frank Janek and so will still go ahead to read the second book in the series.

DRIVING FORCE Is a Solid Novel from Dick Francis, But Not One of His Best

Freddie Croft is an ex-jockey who, since retiring, has built a very profitable business transporting horses to races and back for their owners. Freddie loved being a jockey and this is a way of keeping his hand in the game, at least to some extent. He runs a pretty tight ship, but his whole enterprise is placed in jeopardy when one of his drivers violates one of Freddie's most important rules and picks up a hitchhiker. When the driver reaches the point where his passenger was to leave the horse van, the driver discovers that the passenger has died. Not knowing what else to do, he drives the van and the body back to Freddie's farm and has to face the music.The dead body in the truck opens the door to a run of mysteries and bad fortune for Croft and his operation. He discovers that someone has been using his vans to smuggle something, but he doesn't know what it is or was. As the mystery deepens, someone else will die and Freddie Croft will find himself in mortal danger.This is a fairly typical Dick Francis novel although it lacks the tension of many of the better books in the series. This may result from the fact that there is no nasty, violent, amoral villain operating behind the scenes as there often is in these novels. In consequence, although some bad things happen to Freddie, the reader doesn't sense the danger here that you usually do in one of these books.Francis often uses these novels to explore various aspects of the racing world and in this case, we get a thorough education about the business of transporting horses back and forth between races and other venues. It's something so mundane that most people wouldn't even think about it and yet, of course, it's an absolutely vital function. We also learn a fair deal--perhaps too much, actually, about viruses, computer and otherwise, although this information is now somewhat dated. Still, it's a pleasant read, and fans of the series will no doubt enjoy it.
Posted by James L. Thane at 3:30 PM No comments:

Jack Reacher Finds Himself in the Middle of an Intricate Puzzle 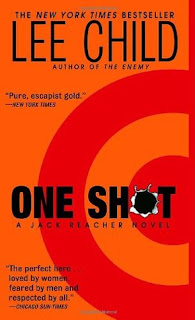 The ninth installment in the Jack Reacher series is one of the better books in the series. It opens when a highly efficient sniper sets up in a parking garage in a Midwestern city and shoots five people dead, missing with only one of six shots. The shooter gets away clean but leaves what appears to be a boatload of evidence in his wake. Following the forensic trail, the police quickly arrest an ex-army sniper named James Barr. The evidence against him is overwhelming, but once arrested, the only thing Barr says is, "Get me Jack Reacher."

Reacher, it turns out, is already on his way. Reacher has been whiling away his time in Miami Beach when he sees a news report about the incident. He and James Barr have ancient history between them and immediately upon seeing the report Reacher is on a bus, headed in Barr's direction. Upon arriving in the city, Reacher checks in with the D.A. and with the lawyer who's defending Barr and who just happens to also be the D.A.'s daughter, and from that point on, everything turns topsy-turvey.

This is a very intricately plotted book, with a lot of unexpected twists and turns that make it hard to review the book without giving away critical information that readers should be left to discover for themselves. Suffice it to say that the book is action-packed with a lot of interesting characters. Reacher himself is in top form and it's a lot of fun watching him reason his way through the puzzle that's been presented him. It's even more fun to then watch him periodically kick the crap out of some truly bad guys who really deserve it. Fans of the series will not want to miss this one, and people looking to try the series would do well to begin here.

Sergeants Sueno and Bascom Confront Another Dangerous and Delicate Case 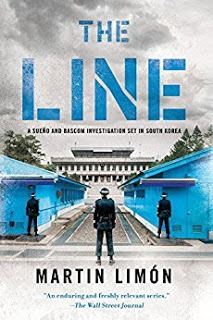 Army CID sergeants George Sueno and Ernie Bascom encounter one of their most delicate and dangerous cases yet when they are summoned to the scene of a murder in the Demilitarized Zone that separates North and South Korea during the 1970s, when tensions between the two Koreas and between North Korea and the United States are still very high. There they discover the body of a Korean soldier, Corporal Noh Jong-bei, who was working with the Americans. The victim had been murdered by a blow to the back of the head and left lying across the line separating North and South Korea.The North Koreans try to claim the body, but on orders from a superior officer, Sueno and Bascom drag it onto the South Korean side of the border. In the process, they create an international incident that could ultimately spark a resumption of the hostilities between the warring parties. While the North Koreans insist that Jong-bei was murdered by an American, at least one American commander insists that the North Koreans were responsible and tensions begin to rise. As they do, Sueno and Bascom are unfairly blamed for instigating the trouble and the only way out of the mess is for them to solve the killing.The investigation is taken away from Sueno and Bascom, though, and given to others who quickly "solve" the crime and defuse the international tension by arresting an American private named Teddy Fusterman and charging him with the murder. Sueno and Bascom had originally concluded that the weapon used to kill Jong-bei was a military entrenching tool and a bloody entrenching tool is found in Fusterman's locker. Case closed.Although warned off the case, Sueno and Bascom continue to investigate and raise doubts about Festerman's guilt. In the meantime, they are ordered to investigate the disappearance of the American wife of a U.S. officer who has gone missing after being seen with a Korean woman known for recruiting women to work as "hostesses" in clubs that cater to wealthy businessmen.Both cases are complex and, as often happens in these novels, will have Sueno and Bascom often skating on very thin ice. It's always fun to follow their adventures and misadventures and it's always interesting to learn about the Korean history and culture that is integral to these books. The Line is a solid entry in a very good series.
Posted by James L. Thane at 8:29 AM No comments: