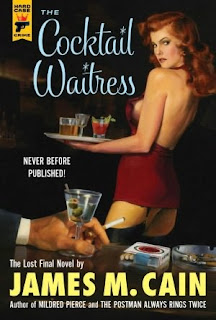 James M. Cain is best known for his three classic novels: Double Indemnity, The Postman Always Rings Twice and Mildred Pierce. The Cocktail Waitress is his last book and was unpublished at the time of his death. Cain was still working on the book, although he had completed several drafts of it, and there is no way of knowing at this point whether he was happy with the work he had done and whether he thought it was ready for publication. The fact that he had not yet submitted it by the time he died, would suggest, though, that he was probably not yet ready to send it out into the world.

The manuscript disappeared for a number of years and was later discovered by Charles Ardai, the editor of the Hard Case Crime series. Ardai assembled from Cain's various drafts the version that now appears.

The book contains echoes of Cain's three classics, most notably Mildred Pierce. In both cases, the protagonist is a younger woman, suddenly left alone to fend for herself and her children as best she can. Thankfully, in this case the child in question is not nearly as intolerable as Mildred Pierce's daughter, Veda.

The book opens with the death of a man named Ron Medford. He leaves a widow, Joan, and a young son. Medford was a drunk and an abusive husband and Joan is not going to waste a lot of tears on his passing. She finds herself in trouble, however, because a young, ambitious detective believes that she was somehow complicit in her husband's death, even though he died, drunk, smashing a borrowed car into an abutment.

In addition to being hounded by the police, Joan has no way of supporting herself. Reluctantly, she farms her young son out to her sister and takes a job as a cocktail waitress, wearing suggestive clothing and doing what it takes to survive. Before long, two men are competing for her affections. One is an elderly rich widower; the other is a handsome but penniless schemer. This sets the stage for a great deal of mischief as Joan struggles to make the best of a bad situation and put her life back on the track to happiness. As is usually the case in a novel by James M. Cain, good luck with that.

This is a good read, though it is not nearly the equal of his three classics. But those who have enjoyed Cain's earlier books will certainly want to look for it.
Posted by James L. Thane at 11:39 AM