A Cold Shot to the Heart 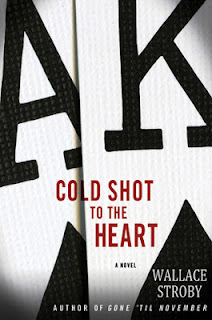 If the late Richard Stark (Donald Westlake) and Christa Faust had ever collaborated on a novel, it probably would have sounded a lot like A Cold Shot to the Heart, by Wallace Stroby. Which also means that it doubtless would have been a damn fine book.

It's also a very hard book to review. This is one of those novels where you don't want to spoil anything. You want every other reader to discover each delicious twist and turn for himself or herself. So, bare bones: Crissa Stone is a criminal. A middle man hooks her up with a crew that is planning a major score. As almost always happens in one of Stark's Parker novels, something goes wrong and Crissa finds herself in deep trouble.

Meanwhile, in a parallel story, a truly creepy low-level mobster named Eddie the Saint is fresh out of prison. After five years inside, he thinks he has some money coming. He is determined to get it.

'Nuff said. If you like hard-boiled, noirish reads and kick-ass female protagonists, find this book and read it yourself. You won't regret it.
Posted by James L. Thane at 4:14 PM