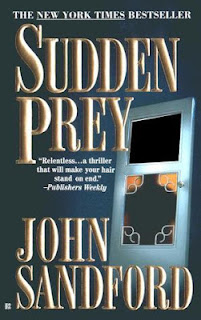 This is another very good installment in John Sandford's Prey series, featuring Minneapolis police detective Lucas Davenport. As the book opens, Davenport's team takes down a crew that's been holding up credit unions. In the shootout, two women are killed--the wife and sister of a violent criminal named Dick LaChaise.

LaChaise is halfway through a nine-year prison term and is not thought to be a major flight risk. He's allowed to attend his wife's funeral with only one escort. As any reader will understand the moment he or she is introduced to LaChaise, this is going to be bad news for the escort, who's soon lying dead on the floor of the funeral parlor.

LaChaise is in the wind with two equally messed up associates, determined to wreak revenge on the members of Davenport's team whom he blames for the death of his wife. He will attack and kill their loved ones as they have killed his, an eye for an eye as he says.

The principal target, of course, will be Davenport's fiance, surgeon Weather Karkinnen. What follows is a particularly gripping game of cat and mouse as the cops attempt to fend off the attacks and recapture LaChaise and his associates. And before it's over, virtually all of the characters, good guys and bad, will become sudden prey.

There's a great cast of characters in this book. Lucas, Del, Sloan and the other members of the team are all in fine form. Weather reacts to the situation exactly as readers of the series would imagine, which only adds to the tension and the fun. As always, Sandford does a great job with the villains, and Dick LaChaise is one of his most inspired creations. All of the action leads to a great climax and both long-time fans and first-time readers will be turning pages well into the night, racing to get there.
Posted by James L. Thane at 4:19 PM