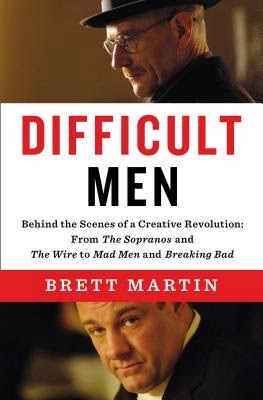 As the subtitle of this book suggests, Brett Martin sets out to describe the story of a creative revolution in television that began in the late 1990s and early 2000s and produced what Martin describes as the third Golden Age of television.

This revolution occurred principally on cable and was led by the amazing success of "The Sopranos" on HBO. In the wake of that success came shows like "The Wire," "Deadwood," "Breaking Bad," "Mad Men," "The Shield," "Six Feet Under," and others. These shows were riskier, more literate, and more challenging than most of the television shows that preceded them, although glimmerings of what was to come could be seen earlier in shows like "Hill Street Blues" and "NYPD Blue."

The characters that populated these shows also differed dramatically from most of those that had inhabited earlier shows. The leads in these programs were almost exclusively male. They were often seriously flawed, morally complex, deeply human characters who looked nothing like traditional leading men, save perhaps for Jon Hamm who portrays the advertising executive, Don Draper, in "Mad Men."

In another departure from tradition, viewers were often expected to sympathize and root for the bad guys--people like Tony Soprano, Al Swearengen, Walter White, and even Vince Mackey, a seriously corrupt cop who cold-bloodedly sets up and murders another cop in the very first episode of the series.

The men behind these series (and those in charge were nearly always men) were often almost as troubled and as complicated as the characters they created. These were the powerful writers and show runners like David Chase, Ed Burns, David Simon, David Milch, Alan Ball and others who were given the power to create and develop these shows. Many of these men imagined themselves as auteurs, along the lines of the great film directors that many of them idolized. Martin suggests that while most of these men were gifted writers, producers and directors, they could be, at times, impossible to work with.

Martin tells a very engaging story, that will appeal to the large numbers of fans of these various shows. He has interviewed virtually all of the principals involved in these programs, along with a host of other people, and one finishes the book feeling like he or she has been given a look deep inside this revolution.

One caveat: Inevitably in a book like this, there are a lot of spoilers. In discussing and dissecting these shows, Martin gives away a lot of important plot points and so if you are late getting to some of these programs and still intend to do so, it might be a good idea to save this book until you've actually finished watching them.
Posted by James L. Thane at 2:27 PM