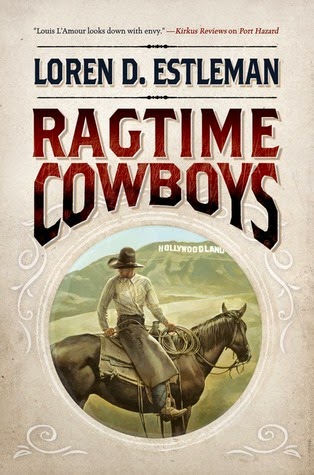 This very entertaining novel opens with real-life ex-Pinkerton agent Charlie Siringo, sitting in his Los Angeles home near the Hollywoodland sign one rainy night in 1921. He's trying to protect his typewriter and the novel he's attempting to write from the rain that's leaking through the several holes in his roof when Wyatt Earp comes knocking on the door.

Siringo had a long and illustrious career with the Pinkertons, and is credited with being the first detective to go undercover in an effort to capture criminals. Most famously, Siringo infiltrated Butch Cassidy's gang, leading to the arrest of some of the gang's members. After leaving the agency, Siringo ultimately wound up in California where he attempted to support himself by writing novels based on his experiences. In the meantime, after his own adventures in Tombstone and other such places, Wyatt Earp wound up in L.A., working as an advisor to directors making western movies.

Someone has stolen a prize thoroughbred belonging to Earp and Earp hires Siringo to find it. Siringo badly needs the money and so accepts the case. The trail leads north to San Francisco, where Charlie recruits another ex-Pinkerton agent and struggling novelist named Dashiell Hammett to assist in the case.

The pair winds up interviewing an important witness on the northern California ranch belonging to the widow of the famous writer, Jack London. At that point the case suddenly becomes much more complex and infinitely more dangerous. Before it's done, Siringo and Hammett will be up against a devious cast of characters which includes Joseph P. Kennedy who, even in 1921, has ambitions of seeing his son in the White House. The infamous Tea Pot Dome scandal is coming to a boil; prohibition is just under way, and all of this will ultimately come into play.

A host of historical figures like Will Rogers will put in appearances as the book progresses and in and around the action, the very conservative Siringo and the anarchist Hammett will wage an ongoing verbal battle over the events of the day. All in all, it's great fun and Estleman has brought this historical figures back to life in fine style.