Shotgun Murders Bedevil the Detectives of the 87th Precinct 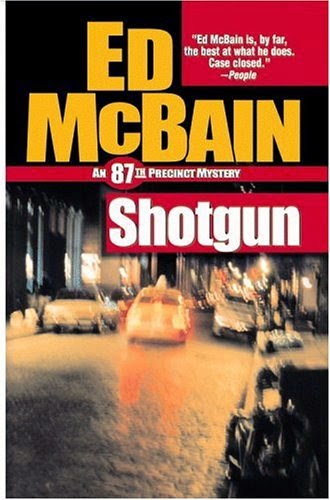 This is another sold entry from the middle of the 87th Precinct series. As the book opens, detectives Steve Carella and Bert Kling are assigned a particularly messy case. A couple has died from shotgun blasts. The first cops on the scene are ready to close the case and rule it a routine murder/suicide. Carella, though, points out that both victims have been shot twice and that it's highly unlikely that any suicide victim would be able to accomplish that feat after first blowing off half of his or her own head with a shotgun.

The victims are identified as a traveling salesman and his wife who were shot in the middle of the night. Amazingly, though, no one else in their apartment building heard the shots and was concerned enough to call it in. The bodies were thus discovered the next morning by the milkman.

There are precious few clues and even fewer suspects; no one seem to have even mildly disliked either the man or his wife. But when Carella and Kling interview the staff of the company where the man worked, a particularly hot and ready receptionist is attracted to Kling. She is not remotely bashful about pursuing him, which will cause serious problems with Kling's girlfriend, Cindy.

Meanwhile, in an equally baffling case, a woman is killed in her apartment, again in the middle of the night, after meeting a stranger in a bar. But who was the stranger, and did he kill the woman? Detectives Hawes and Meyer are left to sort that one out and in the end, McBain again provides the reader with an excellent excuse for ignoring his or her responsibilities and losing an evening in a book.