Will There Be Honor Among Thieves? 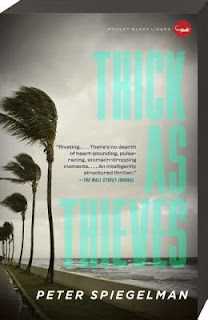 Thick As Thieves is a densely plotted heist novel that locks you in quickly at the beginning of the story and then continues to ratchet up the tension as it races to a startling climax.

At the center of the story is an ex-CIA agent named Carr. He's the new leader of a small band of elite criminals who are planning a huge score. The mark is Curtis Prager, a former hedge fund manager who fell from grace and who now launders huge amounts of money for various criminal enterprises. Carr and company intend to relieve Mr. Prager of many of the millions of dollars he's holding for his various clients.

It won't be easy. Prager lives on a huge estate in south Florida and is protected by a network of top-flight, virtually impenetrable security, both physical and electronic. Breaking through those barriers will not be a job for amateurs or for the faint of heart.

If the job weren't tough enough already, Carr has problems with members of his own team. Their last leader, a man named Declan, was killed when the team's last job went south. This is Carr's first time at the helm and other members of the team worry about his ability to get the job done. They all have pretty massive egos of their own, and some of them may have plans of their own that don't exactly dovetail with Carr's. Especially interesting is the beautiful, sexy Valerie who is the team's honey trap and who appears to have fallen hard for Carr.
Or has she? Inevitably in a crew like this, there's always the issue of honor among thieves.

This is a riveting story that travels from Florida to the Caribbean, to Latin America and elsewhere. The details of the planned heist are extremely intriguing, as is the cast of characters. And every time you think you've just figured out what's going on, the story races off in a different direction.

I'd recommend this book to anyone who likes crime fiction, and I'd especially recommend it to anyone who enjoyed Richard Stark's Parker series. While there are obvious differences between this book and the Parker books, they have enough in common that Parker fans might well want to look for this one.
Posted by James L. Thane at 12:32 PM