Travis McGee to the Rescue Again! 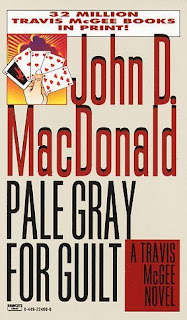 Pretend for a moment that it's 1968 and you're a shady, amoral, would-be land developer in some scraggly-ass county in the Middle of Nowhere, Florida. Assume further that you own a couple of hundred acres of land near a waterway and that a big company is looking to acquire the land to build a major plant.

Assume further that there's a guy who owns ten acres of land between you and the waterway that is critical to the plans of the big company. You make the marina operator an offer for his land, but he turns it down. He's working on his own version of the American Dream, which centers on developing his marina and a small motel.

Fortunately, you're well-connected with the local banker and politicians while the marina owner is a relative newcomer. So you pull some strings and get your pals to put pressure on the guy. Before he knows it, his loans are coming due; his business has dried up and his dream has turned to crap.

But the stubborn clown still won't sell and then one afternoon he turns up dead. It could have been an accident; the sheriff rules it a suicide, and who the hell really knows? The good thing about it, though, is that the guy's wife is really up against it now, giving you the chance to grab the land for virtually nothing while leaving her saddled with the huge remaining mortgage. Clearly, this is your lucky day.

Or maybe not. Because just when things are coming up roses, you slap yourself upside the head and say, "OMG; I really hope that damned marina guy wasn't one of Travis McGee's best friends!"

Sadly for you (and for a lot of your pals), it turns out that he was and you are about to find yourself in a huge stinking pile of steaming stuff.

McGee discovers what has happened and immediately sets out to more than even the score. As readers of the series know, McGee is a "salvage" expert who recovers things that have been taken from people who are left with no legal recourse. Normally, McGee's finder's fee is fifty percent of whatever he recovers, but this time it's personal and he's acting on behalf of his friend's widow.

This is one of the better books in the series, mainly because of the very clever scheme that McGee creates with the help of his friend, Meyer. It's also not quite as cringe-inducing when it comes to McGee's treatment of women. This book, too, is certainly dated in that regard, but it's better than a number of others. All in all, a fun way to spend a rainy afternoon.
Posted by James L. Thane at 3:16 PM