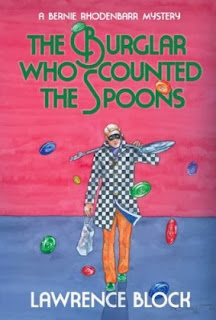 After an absence of nearly ten years, Bernie Rhodenbarr, burglar and bookstore owner, returns in The Burglar Who Counted the Spoons. For those who haven't yet made his acquaintance, Bernie is the creation of Lawrence Block, who is also known for his hit man series featuring John Keller, and his brilliant P.I. series that features Matthew Scudder.

The Rhodenbarr books are much more light-hearted that the Scudder books, and Bernie is blessedly free of the demons that have haunted his stable mate through the years. Bernie thinks of himself as the last of the Gentlemen Burglars and he's much quicker with his wit than with his fists or with any other sort of weapon.

These books generally follow a formula in which Bernie is burgling a house or an apartment, almost always belonging to someone who can well-afford to lose whatever it might be that Bernie is about to relieve them of. Then, in the course of things, a body inconveniently appears, though never as a part of Bernie's handiwork.

The case will be investigated by Bernie's nemesis, the fumbling police detective, Ray Kirschmann. Ray always assumes that Bernie is responsible for the homicide and Bernie then has to solve the crime in order to save his own skin. Almost always this involves gathering all the potential subjects together at the end, in the style of Agatha Christie, so that Bernie can explain the logic of the crime and finally point the finger at the Real Killer.

It's always a lot of fun to watch the story unfold and while this book deviates slightly from the traditional formula, it's certain to entertain anyone who's enjoyed the series through the years.

In this case, a man named "Smith" hires Bernie to commit a series of burglaries to retrieve objects of value to the client which he cannot obtain legally. Meanwhile, Ray Kirschmann is investigating a puzzling homicide and no one will be surprised when the two cases intersect. As always, along the way there's a good deal of banter between Bernie and his best friend, Carolyn, who is a lesbian dog groomer.

Readers who have enjoyed the earlier books will certainly like this one as well. Readers who find the concept intriguing but who haven't read the earlier books might want to start at the beginning of the series with Burglars Can't Be Choosers. While neophytes would probably enjoy this new entry, there's a fair amount going on that would be better appreciated by those who have watched Bernie's career and his relationships develop through the years. We can only hope that Bernie is not now in for another ten-year vacation.
Posted by James L. Thane at 2:36 PM