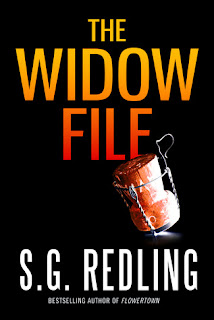 A petite young data analyst named Dani works for a very secretive, exclusive security firm on the outskirts of Washington, D.C. The firm is doing a job for a defense contractor, attempting to determine who in the firm might be leaking its industrial secrets. Then out of the blue one day, Dani's boss announces that the job is over. The client has called them off and the team is to assemble all the material it has collected so that the client can pick it up later that day.

Oops. Dani has taken some of the material related to the case home to her apartment so that she can work on it after hours. It's nothing critical, just routine scraps of paper and other such things that the target has thrown away. Dani's specialty is examining this sort of material and developing a profile of the subject.

She races home to gather up the material so that it can be included in the package that is being returned to the client. But she arrives back at the firm's headquarters, which is in a secluded rural area, to find a black van blocking the road that the employees use to access the back door.

In a thriller like this, it's never good news when a mysterious black van appears, and the knowledgeable reader is already yelling at Dani to turn around and get the hell out of there. Of course she doesn't, and when she enters the building, she finds that all of her co-workers have been killed. Even worse, the killers are still in the building and she is now effectively trapped.

Dani has no idea what in the hell is going on, and neither does the reader. But since this is still only the beginning of the book, she will manage a narrow escape from the building. Sadly, though, the killers have a roster of employees and they know that Dani is missing. They also believe that she is in possession of the critical item that they were supposed to be retrieving from the security firm, even though Dani has no idea what in the world it could be.

Now a skilled and savage hit man is on Dani's trail, determined to recapture the item and complete the job his team started earlier in the day and if Dani is going to survive, she's going to have to be very nimble, both of foot and mind.

S. G. Redling has created here a tense, taut thriller with a very intriguing protagonist. There's a lot of action; the plot moves swiftly and the reader may well wind up turning the pages of this story well into the night.
Posted by James L. Thane at 5:10 PM