A Great Piece of Pulp Fiction 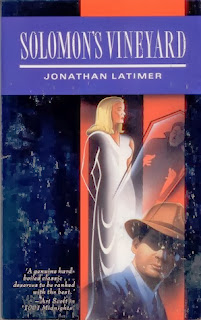 This is a classic piece of pulp fiction that was first published in Britain in 1941, but which was deemed much too racy for the U.S. at that time. Accordingly, it was first published here in an sanitized version that glossed over all the parts that were too "adult" for the delicate sensibilities of the American reading public. The opening couple of sentences of the original version might suggest why:

"From the way her buttocks looked under the black silk dress, I knew she'd be good in bed. The silk was tight and under it the muscles worked slow and easy. I saw weight there, and control, and, brother, those are things I like in a woman."

Our intrepid narrator is a man named Karl Craven who's just arrived in a small, out-of-the-way Midwestern town on some mysterious errand. We learn that he's been preceded in town by a partner, or an accomplice; as Craven checks into the hotel, we're not yet sure which. Things get complicated right away, though,when it turns out that the man Craven is to meet has been shot to death. The killer is still at large.

The town is as corrupt as they come in a pulp novel of this sort, from the sheriff on down. But added to the mix is a mysterious religious retreat, know as Solomon's Vineyard, which sits just outside of town. No one is quite sure exactly what goes on behind the closed doors of the Vineyard, but you can bet it's titillating and maybe even dangerous.

Karl Craven is a large man with even larger appetites and he drinks and eats his way through this story at a mind-boggling pace. At one point, he has a four-pound steak for dinner, along with all the trimmings and a half an apple pie for dessert. His sexual appetites are pretty much on the same scale.

It would be unfair to reveal much of anything about the plot, but this is a story with lots of gunplay and other malicious violence. There's tough dames and a fair amount of rough, kinky sex, some grave-robbing and a bizarre religious cult headed by a princess who may be even too much for a man like Craven to handle.

If your a fan of the sort of trashy pulp fiction that was popular at the middle of the last century, you'll probably love this book which is so much over the top that it almost becomes a parody of the genre. Latimer, who would ultimately become a fairly successful Hollywood screenwriter walks you right up to the line but steps back just in time to give you a really fun read.
Posted by James L. Thane at 2:53 PM