Detective Sergeant Mulheisen Meets a Very Attractive Redhead and Some of Her Interesting Friends... 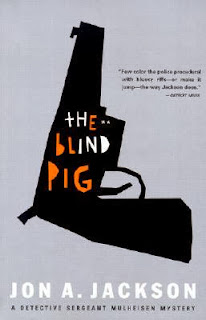 This is the second novel in the series by Jon A. Jackson featuring Detroit Detective Sergeant "Fang" Mulheisen and his nemesis, hit man Joe Service. This early in the series, Service is still on the perimeter of the action; he's more aware of Mulheisen than Mulheisen is of him, but the detective is aware of the fact that some clever, sinister force is lurking out there on the edge of the action.

The case opens when a police patrolman answers a burglary call and shoots to death a man who had broken into a garage. The dead man has no ID and no one can figure out what he might have been looking for in the garage.

The garage in question belongs to an up and coming trucking executive named Jerry Vanni. Vanni is an ambitious young man who's also branching out into juke boxes and vending machines. The plot thickens when two gunmen come into a bar and shoot to death one of Vanni's jukeboxes and one of his cigarette machines.

Mulheisen wonders if Vanni has gotten on the wrong side of the mobsters who usually control things like juke boxes and vending machines in the Motor City. He's also very intrigued by Vanni's secretary, Mandy Cecil, a gorgeous young redhead who seldom wears foundation garments.

Things get even more curious when Mul encounters the charming Ms. Cecil in the middle of the night in the company of some would-be Cuban revolutionaries in a "blind pig," an after-hours club for people like Mulheisen who aren't always ready to go home when the regular bars close at 2:00 a.m.

Before long, all hell is breaking loose and it's a great ride for the reader. Jackson creates memorable characters and there's plenty of witty banter and lots of great action. Mulheisen is a great protagonist and at this point, the reader has seen enough of Joe Service to know that things are probably going to get very interesting later on down the road.

This book should appeal to any fan of crime fiction but anyone interested would be especially well-advised to start this series at the beginning with The Diehard: Detective Sergeant Mulheisen Mysteries.
Posted by James L. Thane at 3:30 PM