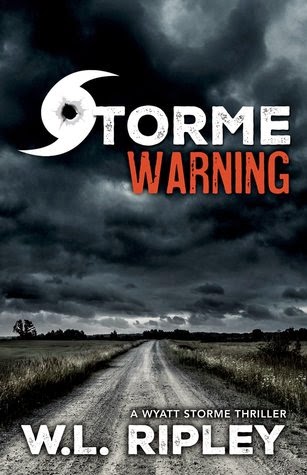 Wyatt Storme enjoyed a very successful career in the NFL as a wide receiver for the Dallas Cowboys, but once he decided to hang up his cleats and leave the limelight, he moved off the grid as far as possible and took up residence in a house that he built himself in a remote part of Missouri. Now, he’d like nothing more than to simply be left alone to enjoy the solitude, a good cigar, and the occasional visit from his beautiful girlfriend, a television news anchor.

But dropping out of the world at the beginning of the Twenty-first Century, is not as easy as it once was, and the rest of the world seems unwilling to let go of Storme. Wyatt is approached by his best friend, an ex-CIA agent named Chick Easton. Easton has been hired to bodyguard a pain-in-the-ass movie star named Cameron Fogarty who’s been getting death threats. Fogarty has been signed to play the lead in a new big-budget western movie about the James gang, and the director is determined to shoot the movie on the original site of Bailey’s Crossing, Missouri, where the gang once made a famous raid.

The problem with the idea is that the site is on the property now owned by Wyatt Storme. Initially, Wyatt wants nothing whatsoever to do with the project; he prefers his westerns starring Randolph Scott. But Chick pleads with Wyatt to go along with the idea and Wyatt ultimately does so as a favor to his friend.

Once the movie begins production, Wyatt spends a lot of time hanging around the set, watching the back of his best friend who, in turn, is watching the back of the bad-boy movie actor. Complicating matters is the fact that a former mob leg-breaker, recently released from the pen, is on the hunt for Storme. The ex-con is named Rory Marchibroda, and Storme once badly kicked his butt when Marchibroda attempted to extort “protection” money from one of Wyatt’s friends. Machibroda’s boss fired him for failure to perform as expected and Marchibroda’s been looking for revenge ever since.

All of this makes for a volatile and entertaining mix. Neither Storm not his pal Chick is about to take a load of crap from anyone, whether it’s mobsters, movie stars, or self-important film directors. There’s plenty of action as the story unfolds, but the best part of the book lies in watching the by-play between Wyatt and Chick, particularly when they’re confronting someone who’s attempting to give them grief. It’s somewhat reminiscent of the banter between Spenser and Hawk in Robert B. Parker’s novels, and it’s a lot of fun to watch. All in all, this is one Storme warning you won’t mind getting at all.
Posted by James L. Thane at 12:46 PM