Wedding Bells Are Ringing in the 87th Precinct 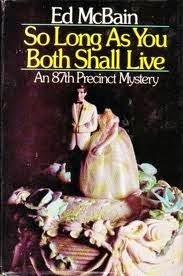 It's a happy day for the detectives of the 87th Precinct when one of their own, Bert Kling, marries his beautiful girlfriend, a very successful model named Augusta Blair. After the wedding party is over, the newlyweds retire to their hotel room and Bert decides to take a shower before the real festivities begin. But when Burt gets out of the shower, he discovers much to his dismay, that his bride has disappeared.

At first, Bert thinks that his pals have pulled the old "Kidnap the Bride" wedding trick and that they will be holding Augusta hostage downstairs in the hotel bar until Bert comes down and buys enough drinks to ransom her back. But then Bert discovers one of Augusta's shoes abandoned on the floor and even worse, finds a chloroform-soaked rag in the wastebasket. Obviously, this is no joke.

The detectives of the 87th spring into action to investigate the kidnapping, expecting that Bert will soon receive a ransom demand. But hours later, the kidnapper has not called and there is no news of the disappearing bride. At this point, Fat Ollie Weeks inserts himself into the case, even though he's assigned to another precinct. Nobody in the 87th can stand Fat Ollie, even though most of them admit that he's an excellent detective. And as it turns out, they're going to need all the help they can get if they have any hope of recovering Augusta alive.

This is among the better books in the series, at least among the first thirty-one of them, and it's fun to watch the detectives work this case which really hits home for them. Another great read from one of the masters.
Posted by James L. Thane at 7:00 AM