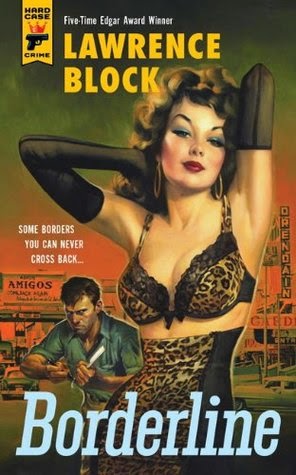 Borderline is a recent release from the folks at Hard Case Crime that brings together a relatively short novel and three short stories by Lawrence Block that were first published in the late 1950s and early '60s, while Block was still cutting his teeth in the crime fiction business. The novel is one that reader would have found on the rotating rack of paperback "pulp" novels down at the local drugstore back in the day, while the short stories originally appeared in the men's magazines of the era.

The crimes at the heart of these stories all basically involve human beings exploiting each other in one way or another, most often sexually. The only real "crime" story here is the last, "Stag Party Girl," in which a young woman jumps out of a cake at a bachelor party and is shot to death. A private detective, who happened to be at the party, must then sort through the other guests to determine who might have killed the poor woman and why.

The short novel, Borderline, takes place on the U.S.-Mexico border where the cities of El Paso and Juarez lie astride the border only yards apart from each other. The story is set in a much earlier day and age when people crossed back and forth across the border pretty much at will, with only an occasional cursory glance from the border patrol.

A number of characters are thrown together in the two cities, including a gambler named Marty, a recent divorcee named Meg, and a young hitchhiker named Lily who has recently arrived from San Francisco and taken up hooking in Juarez as a means of earning enough money to go to New York and live out her dreams. Finally, there's a psycho named Weaver, an ugly man who's never had a friend and who now buys a straight razor and begins to live out the violent fantasies that, until now, he's only entertained in his mind.

This is a book that will appeal principally to fans of Lawrence Block who, like this one, are only too happy to read virtually anything that the MWA Grand Master ever wrote. But no one should expect that it's on a par with the material he wrote later, beginning with his brilliant Matthew Scudder series. And certainly it will appeal to those who enjoy the pulp novels of this era and continue to seek them out in used bookstores everywhere. All will be grateful to Hard Case Crime for presenting these stories in this fresh edition, complete with one of the classic pulp covers that the publisher does so well.
Posted by James L. Thane at 4:31 PM