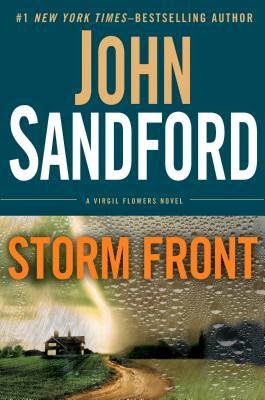 Elijah Jones is a minister and college professor working on an archeological dig in Israel. He's also dying of cancer and about to leave behind him a wife with Alzheimer's who may wind up living for years with minimal care. Then one day, Jones's team uncovers an ancient stele--a stone with inscriptions carved into it. A preliminary examination suggests that the information on the stele, if accurate, could require a significant reinterpretation of the Bible and could also radically undermine some long-held religious beliefs.

While the rest of the team sleeps, Jones smuggles the stone out of the camp and makes his way back to Mankato, Minnesota. The theft causes an uproar and the Israeli government sends an attractive female antiquities expert to help American authorities recover the stone.

The American authorities in question would be that F****ing Virgil Flowers of the Minnesota BCI. Virgil is hip deep in an investigation involving fraudulent antique lumber and his prime suspect is a very sexy woman named "Ma" Nobles. When Virgil's boss, Lucas Davenport, pulls him off the case and tells him to pick up the Israeli expert and recover the artifact, he's not at all pleased, but figures it should be a fairly easy and simple assignment.

The case immediately takes a lot of unexpected twists and turns, and tracking down either the Reverend Jones or the stele is hardly a piece of cake. Things are complicated because, as word of the discovery spreads, an awful lot of other people both foreign and domestic are anxious to get their hands on the stele. Virgil just wants to recover the damned thing and return it to its rightful owners before anyone gets killed so that he can get back to Ma Nobles and the Case of the Fraudulent Lumber. But that may be easier said than done.

As always, it's great fun to spend time in the company of Virgil Flowers, and this is a pretty entertaining book. To my mind, though, it's not up to the standards set by the earlier Virgil books. The plot is way way out in Dan Brown land and is so implausible that a reader, or at least this one, simply can't suspend disbelief enough to really get into the book. I never for a moment bought into the plot, but I did laugh a lot as Virgil investigated the case as only he can. I'll look forward to the next book in the series, hoping that it returns to form.
Posted by James L. Thane at 12:53 PM