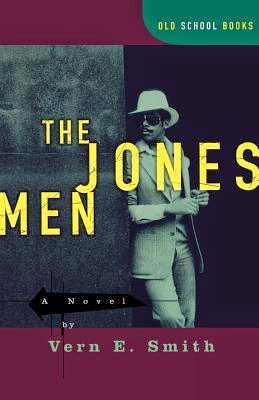 This dark, gritty novel is the only one ever written by Vern E. Smith, which is really too bad. If the guy was capable of writing books like this one, then fans of crime fiction are that much poorer for not having more of them.

Originally published in 1974, the book is set in the seedy underworld of Detroit where dope addicts struggle to find their next fix and the dealers jockey for position on the supply chain. The Jones Men are the heroin dealers and the current king of the hill is Willis McDaniel. But uneasy lies the head that wears the crown and all that sort of thing. There are always other ruthless and ambitious men ready to kick the king out of the way and wear the crown themselves.

At a party one night, McDaniel carelessly makes a remark about a big incoming shipment of dope that he's expecting. The word filters through the drug community to a kid named Lennie Jack who's fresh home from the war in Vietnam and looking to step up in the world.

Lennie Jack and a couple of buddies hit the exchange and make off with McDaneil's shipment. McDaniel, naturally, is furious both because of the dope he has lost and, even more important, because the robbery makes him look vulnerable in a world where the most dangerous thing that can happen to a drug kingpin is to look weak.

McDaniel launches an "investigation" into the theft and before long, the blood is flowing like a river. It's a brutal world where mercy, trust and security are unknown commodities, where today's ally may be tonight's enemy, and where it's every man for himself.

Smith writes a very compelling story set in a very believable world where, before the days of Escalades and Lincoln Navigators, the dealers drive tricked-out Cadillacs and dress like Super Fly. The Jones Men is a trip back in time that any fan of nourish crime fiction is almost certain to enjoy.
Posted by James L. Thane at 3:04 PM