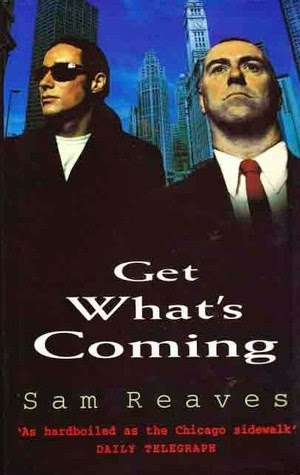 This is my favorite of Same Reaves' excellent series featuring the cab driving philosopher, Cooper MacLeish. In the first three books, driving a hack has found MacLeish getting into an awful lot of dangerous trouble and so he's now left the cab behind and taken what would appear to be a fairly safe and sensible job as the driver for a major Chicago real estate developer named Regis Swanson. This is a huge relief to Cooper's long-time girlfriend, Diana, who has suffered through his earlier troubles and stood by him when many other women might have bailed on the relationship.

Cooper and Diana are now newly married, but trouble seems to have a knack for finding MacLeish, no matter where he might be. A low-life scumbag sees a chance to rip off a group of drug dealers for a million dollars in cash. Naturally, the scumbag would prefer that the drug dealers not be hot on his trail, and so to throw them off the track, he frames Nate Swanson, the son of Regis, who owns a music club. The bad guys take the bait, track down Nate and kill him when he doesn't produce the money that he never had in the first place.

Regis Swanson is naturally devastated by the death of his son, and the bad guys now assume that Regis has their million dollars. This means that Regis and everyone around him, including Cooper MacLeish, are now in the line of fire. Much to Diana's consternation, her new husband refuses to just quit and walk away from the situation. He's determined to sort things out and provide some sort of justice, now matter how rough it might be. Naturally a lot of violence will ensue, and MacLeish may wind up risking everything, including his marriage and his life, before he can get things sorted out.

Again, Sam Reaves has created here a unique and very compelling protagonist, and he's built around him a very interesting and gripping story with lots of unexpected twists and turns. As always in these books, the city of Chicago plays a major role in the story and Reaves clearly loves the city and knows it very well. Crime fiction fans who have somehow failed to discover Sam Reaves should do themselves a great favor and hunt down all four of the books in this series. It's a winner from start to finish.
Posted by James L. Thane at 7:58 PM