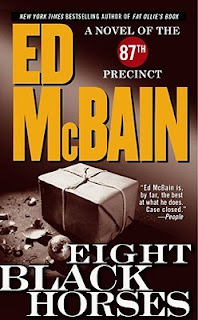 When a beautiful young woman is found naked and shot to death in the park across the street from the 87th Precinct station house, the Detectives of the 87th assume that this is just another tragic homicide and begin their investigation by attempting to identify the victim. Shortly thereafter, though, the detectives receive a communication from their old adversary, the Deaf Man, and the murder takes on a whole new significance.

Twice before, the Deaf Man has orchestrated elaborate criminal plots within the boundaries of the 87th, each with a huge payday at the end for the Deaf Man. And twice his plans have been foiled, in each case more by accident than by the conscious efforts of the detectives who always seem to be one step behind him.

Now the Deaf Man has contrived another convoluted plot--this during the festive holiday season--that will both make him a fortune and at the same time will take deadly revenge on Steve Carella and his other adversaries in the 87th.

As the story progresses, the Deaf Man continues to send envelopes to the detectives with mysterious clues that probably point to his ultimate objective, but the detectives are unable to decipher the clues. In the meantime, the Deaf Man draws into his orbit a number of other actors, some innocent and others not so innocent, as he puts his scheme into motion.

At times the story tantalizes, but at others it seems as if McBain is just playing an elaborate game for his own amusement, both at the expense of his characters and of the reader. There's very little police work done in this police procedural; mostly we watch the detectives sit around speculating about what the Deaf Man is attempting to do. For me, this is a middle-of-the-road entry in this series; I prefer the books in which the detectives actually do a little detecting.
Posted by James L. Thane at 5:14 PM