Another Great Novel from Stuart Neville 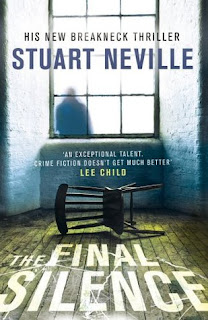 This is the fourth book in Stuart Neville's excellent series which is set in Belfast in the long and complicated shadows of "The Troubles." It opens with the death, by natural causes, of a haunted man named Raymond Drew. Raymond knew he was dying and indeed was anxious to go, but he did not have either the strength or the will to first clean out the secrets that are hiding behind a locked door in the house he left behind.

The house is inherited by his sister, Ida Carlisle, the wife of an ambitious Northern Irish politician named Graham Carlisle. Graham has been clawing his way toward the top of the political ladder for a good number of years, sacrificing anything that stood in his way, including his wife and their only child, Rea, who is now in her early thirties.

Rea never really knew her Uncle Raymond and only has very dim memories of him from a funeral that took place when she was little more than a child. She helps her mother pack up and dispose of the meager belongings that Raymond left behind and is thrilled when her mother tells her that her mother and father are giving the house to her. It needs a lot of work, but for a young woman who never dreamed of owning her own home, it's a tremendous gift.

There remains the problem of getting through the locked door upstairs leading to the only room that Rea and her mother were unable to get into. Ida assumes that the room is empty and that her brother closed it off because he wasn't using it. But after her mother leaves, Rea forces the door open and stumbles onto a secret that will seriously disrupt her life and the lives of many others as well.

In the meantime, the life of former police inspector Jack Lennon is falling to pieces. He has left the police force in disgrace; he has alienated the one woman who believed in and loved him in spite of his faults and, worst of all, he is in danger of losing his daughter who is the only person he truly loves.

Years ago, Lennon and Rea Carlisle had a brief relationship and now circumstances conspire to bring them together again. It's going to be a fateful ride for everyone involved.

It wouldn't be fair to say more, but be advised: once you pick up this book, it's virtually impossible to put it down. The characters are well-drawn and engaging; the story is gripping, and Neville demonstrates here once again the truth of the old axiom that the past is never dead; it isn't even past. The Final Silence is a terrific read.
Posted by James L. Thane at 4:48 PM