Hoke Moseley Has a Mid-Life Crisis 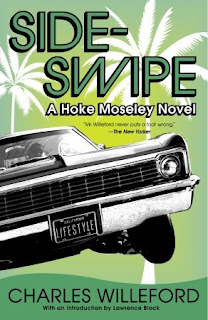 This is the third book in Charles Willeford's excellent series featuring Miami homicide detective Hoke Moseley. As the book opens, Hoke, although still only in his forties, wakes up to a full-blown mid-life crisis. He's completely unable to function irrespective of his responsibilities to his two teenage daughters who live with him, to his department, and to his partner, Ellita Sanchez, who is eight months pregnant (not by Hoke) and who also lives in Hoke's home.

Unable to cope, Hoke takes a leave of absence from his job and retreats to Singer Island, where his wealthy father lives. He takes a job running a small apartment building for his father and vows that he will never leave the island again.

In the meantime, Stanley Sinkiewicz, an elderly retiree who has moved to Florida from Detroit has a brush with the law and, although he is completely innocent, he is briefly forced to share a jail cell with a man claiming to be Robert Smith.

"Smith" is really a psychopathic career criminal named Troy Louden. He has a gift for reading people and immediately pegs Stanley for the sad, lonely man he is at heart. Louden befriends Stanley, schooling him in the way to best deal with the authorities, and before long, Stanley is convinced that Troy is his new best friend.

Louden is desperately hoping to have the charges against him dropped before a fingerprint check is returned and the police discover his real identity. To this end, he asks Stanley to do him a "small favor" once he is released, and, totally won over by his new buddy, the old man agrees. The ploy works and Louden, now free, enlists Stanley to help him pull off a big job he is planning.

Meanwhile, Hoke Mosley is discovering that it's a lot harder to simplify his life than he had hoped. His father is determined to help him get a new job with the local police force, although Hoke has absolutely no interest in the job. His younger daughter joins him on the island further complicating matters, and the tenants in the apartment house generally prove to be a major pain in the butt.

The Mosley story and the Stanley/Louden story proceed along parallel tracks and for a while the reader is left to wonder how Willeford is ever going to link them up. But it really doesn't matter because both stories are very entertaining.

Willeford has populated this book with a number of unique and very interesting characters and between the lines, he has a great deal to say about the nature of family and about the workings of the capitalist system in the United States. All in all, it's a very entertaining book that should appeal to large numbers of readers.
Posted by James L. Thane at 2:11 PM